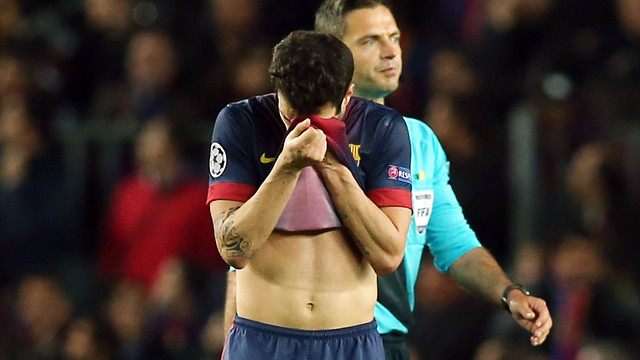 Barça failed to make it to the 2013 Champions League final at Wembley this month – it’ll be an all German affair between Borussia Dortmund and Bayern Munich, who tonight confirmed their place, finishing 7-0 winners on aggregate after beating Barça 0-3 at the Camp Nou. Without the injured Leo Messi, Tito Vilanova’s side went for the fight back, but a Robben goal at the start of the second half ruined their hopes and settled the tie, with two more goals coming before the end- an own goal by Piqué and another from Müller- to confirm the first ever all-German Champions League final.

Barça, then, say goodbye to the Champions League this season after their sixth semi-final on the run, with the possibility of a 22nd league title this coming weekend.

Leo Messi’s absence from the starting line up was the big news before kick off and without the World Number One, the task facing Barça became even tougher. They made a bright start though, attacking with seven players and creating chances after dominating possession early on. With just Valdés and a three man defence (Bartra, Piqué and Adriano) protecting the Barça goal, the team worked hard to break down the German defences, which however stood firm against the onslaught.

The first half ended goalless with just a couple of attacks down the right by Alves and a long range effort from Pedro which Neuer tipped over, for the hosts, whilst Piqué’s skill and speed proved enough to snuff out the German’s occasional counter attack.

Bayern Munich’s all important opener came soon after the break, when a cross field switch caught the Barça defence out and the unmarked Robben chased into the box and fired past Valdes. The German bench rushed out to celebrate – Bayern were now surely through to Wembley.

Vilanova then brought off Xavi and Iniesta, for Alexis and Thiago and the intensity of the game – with the tie already decided – dropped off. One of Barça’s best players on the night – Gerard Piqué was desperately unlucky to put through his own goal from a Ribery cross and a few minutes later the Frenchman provided the cross for Müller to head in the third at the back post and confirm Barça’s farewell to the Wembley final.