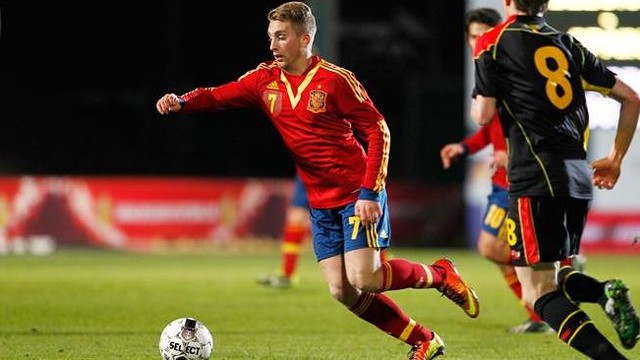 Vicente del Bosque has called up the young Barça winger for the friendly against Bolivia on May 30 in Seville.

Piqué, Jordi Alba, Xavi, Iniesta, Sergio, Cesc and Pedro, who are also in Spain’s World Cup provisional squad. are called up for the game too.

Gerard Deulofeu has been called up for Spain’s World Cup warm up game against Bolivia on May 30 in Seville. The Barça winger wasn’t named in Del Bosque’s provisional 30 man squad for  Brazil, but the Spain boss revealed: “I have a lot of confidence in him. He did very well at Everton and he could be a good solution if somebody gets injured”.

Deulofeu has been a key part of Spain’s under-21 success, but this is his first call up for the full international squad, where he will join the seven Barça players in the provisional squad: Gerard Piqué, Jordi Alba, Xavi Hernández, Andrés Iniesta, Sergio Busquets, Cesc Fàbregas and Pedro Rodríguez.

Del Bosque will name his definitive squad for Brazil on June 2.