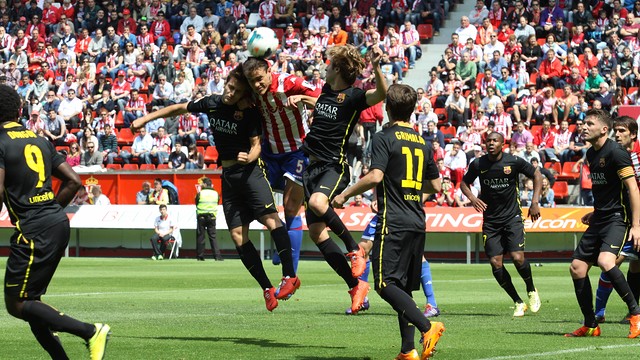 Barça B were defeated by just the one goal (Jony) on Saturday against Sporting Gijón in the Molinón.  Barça B produced a battling if lacklustre performance in the second half but it wasn’t enough to prevent a second away defeat on the bounce, though the team maintains its place near the top of the table.

Neither team on top

With a place in the top flight next season still a possibility, Sporting made most of the running in the opening minutes, though Barça B’s Adama and Dongou provided quite a threat down the wings.  But in the home side’s first clear chance of the game, former Barça player Carmona set up Jony to make it 1-0.

Despite a decent reaction from Barça B, only a good save by Masip stopped Sporting from getting a second before the break.

Sporting sat back to defend their lead in the second half and while Adama provided some threat there was little sign of an equalizer.

Though Barça B had most of the ball, it was the home team that created the real danger, with Mendy hitting the woodwork seconds after coming on as a sub.

In the end, Jony’s first half goal was enough to take all three points and Barça B succumbed to their second successive away defeat after their win in the Miniestadi last week.