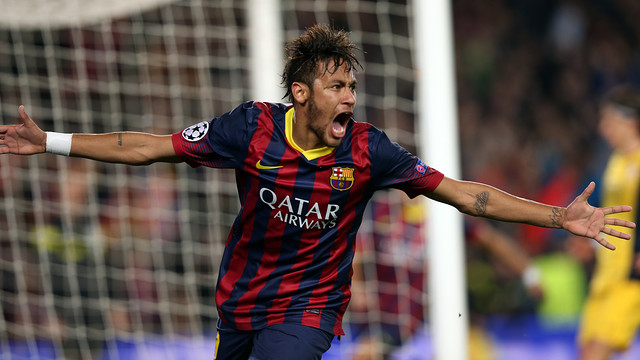 There were no surprises at the Camp Nou tonight  -no surprises in the line ups, in the tactics both teams chose, the way Barça had to work hard to breakdown the visitors’ rock solid and tough tackling defence and in the end, after three draws already this season, no surprise in the result. Diego conjured up a wonder strike from nowhere to give Atletico the lead on 55 minutes, but Barça dug deep and Neymar’s equaliser leaves it all to play for at the Calderon next week.

Atletico came flying out of the traps and for the first quarter of an hour, they seemed to have Barça on the rack  – with Villa missing a great chance to put the visitors ahead after just 4 minutes and when Piqué was forced off after a tumble to be replaced by Bartra, things were looking worryingly dangerous for Martino’s side, who despite coming out clearly focussed on the game, were finding it tough to create any kind of threat.

After that first quarter of an hour though, Barça forced Atletico to defend ever deeper and began to match their opponents aggression and intensity, as they laid siege to the Atletico box. Messi somehow found a way through a packed defence to free Iniesta on the left of the area, but his shot was blocked by a defender on 25 minutes, Soon after, Diego Costa limped off and with their main attacking reference point missing, Atletico dropped even deeper, always on the lookout for a quick counter, which time and again Busquets was quick to snuff out.

The game was now taking on the shape of this season’s earlier match ups, with Barça dominating possession against a tough and stubborn opponent. Chances were few and far between and despite the continuous fouls from Atletico, the game was being played at a frenetic pace. Villa nearly popped up again just before the break, but his effort was well stopped by Pinto.

Diego gets the opener, but Barça fight back

The game continued with Barça controlling possession and tackles flying in from all parts, but Martino’s team were taken by surprise on 55 minutes, when Diego fired home an unstoppable shot from well outside the box after a quick free kick . The crowd upped their volume as they attempted to lift the team and the players responded by moving up a gear, winning the ball, attacking from all angles and producing their best half hour of the game.

Martino put three up front on 67 minutes, replacing Cesc with Alexis and Atletico responded by taking Villa off and bringing on Sosa. Neymar now switched wings and moved to the left and on 71 minutes an exquisite pass from Iniesta found the Brazilian cutting in behind the defence to fire home brilliantly past the Atletico keeper for the equaliser, Courtois then proved his worth with some great saves as the Camp Nou crowd roared the team on. In the end tough it was another draw and the prospect of another epic game to come in a week’s time at the Calderon.