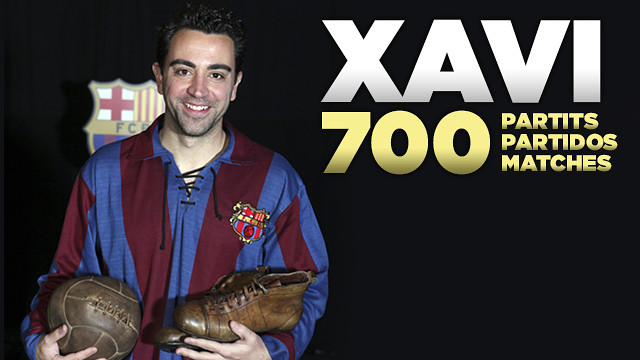 The Catalan midfielder, who is about to turn 34, has played a total of 700 official matches in the Blaugrana strip

The shirt will go to the Museum

Xavi Hernández will donate the shirt he played in this evening to the FC Barcelona Museum.

Xavi Hernández’s legend continues to grow match after match. This Thursday at the Coliseum Alfonso Pérez he wrote another page in FC Barcelona history as he featured in his 700th official match with the first team. The midfielder broke Migueli’s record of matches played for Barça (549) in 2011.

15 years have passed since Louis Van Gaal gave Xavi, who was 18 years old at the time, his first team debut. It was on August 18 of 1998, in the Spanish Super Cup match against Mallorca; Xavi also scored a goal in that game. He’s been on FC Barcelona’s roster for 16 years, and you could say that he’s seen it all. He’s been managed by nine different coaches (Van Gaal, Serra Ferrer, Rexach, Toño de la Cruz, Antic, Rijkaard, Guardiola, Vilanova and Tata Martino) and he’s played a total of 54,726 minutes in the Blaugrana colours.