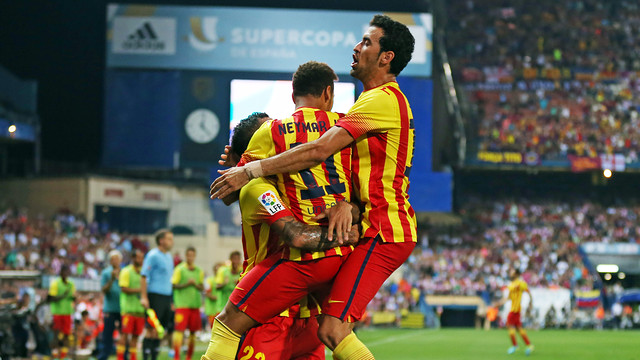 Barça have only drawn on the road in the first leg of the Supercup once before. That was 2-2 at the Santiago Bernabéu in 2011, and Barça went on to win the title

In the last five seasons, Barça have drawn twelve first legs away from home and only once have failed to go on to qualify

FC Barcelona drew 1-1 on Wednesday at the Vicente Calderón, but as we all know, these games are about 120 minutes and after drawing first legs away from home, Barça rarely disappoint at the Camp Nou. The situation has arisen twelve times in the last five seasons, and each time Barça have won the trophy or qualified for the next round, the only exception being the semi-final of the Copa del Rey last season, when after a 1-1 draw with Real Madrid at the Santiago Bernabéu, they fell 3-1 at the Camp Nou.

Barça have won ten of the eighteen Spanish Supercups that they have contested. But against Atlético Madrid it was only the second time that they have drawn the first leg away from home. That wasn’t so long ago, in 2011/2012, against Real Madrid. The first leg at the Santiago Bernabéu ended 2-2, and Barça made no mistake in the return at the Camp Nou, winning 3-2 to claim the trophy.

FC Barcelona have come good in 11 of the last 12 two-legged ties in which they have drawn the first leg. Four ended with the same 1-1 scoreline as that produced on Wednesday at the Vicente Calderón. In 2008/09, Barça followed a 1-1 draw away to Olympique Lyon in the Champions League second round with an emphatic 5-2 victory at the Camp Nou.

The season after, in the same round of the same competition, Barça came back from Stuttgart with the same result, but again sorted things out comfortably at the Camp Nou with a 4-0 win. The situation arose once again in the semis of the 2011/12 Copa del Rey. After drawing at Mestalla, Barça qualified for the final by beating Valencia 2-0 at the Camp Nou.

The only time FCB have not managed to make good of an away draw in the first leg was last season in the semi-finals of the Copa del Rey. Despite the promise of a 1-1 draw at the Santiago Bernabéu, Real Madrid put an end to Barça’s cup run with a 3-1 win at the Camp Nou.

Return legs against Atlético at the Camp Nou

Barça have faced the mattress-makers four times in the Spanish Supercup, winning three times (1991, 1992 and 1996) with Atlético Madrid taking the title just the once (1985). In these games, the second leg has been played at the Camp Nou twice. In 1991, the first leg ended 1-1 and Barça took the trophy by winning 1-0 away in the return.

In 1985, Barça got off to a fine start with a 1-0 win in Catalonia, but things ended in disappointment when Atlético made good of home advantage and won 3-1.