Ferran Soriano, former FC Barcelona economic vice president recognizes that elections of Barca will be a “very exciting period.” “Barca are live and think with emotion and love and concern and I want to reach the electoral period,” says current president of the airline Spanair, which many voices in the race fall 2010.

Soriano has been interviewed on Monday on the agenda of Televisió de Catalunya, Divendres, which define part of their lines of work as head of Spanair, has refused to define its specific role in the election period. What has made it clear that Soriano is “participate” in these elections.

“When setting the election period and I will explain why I think my opinion,” said Soriano, who claims not explained his position to leave the board in 2008 but it will do this by 2010.

Asked by Sandro Rosell, the former vice president said that “what was done in 2003 was extraordinary and it is important to explain what was done and what things were important. “It is important that these elections there are several ideas and I explain everything I think during these dates”

Alfons Godall and is officially candidate for president of FC Barcelona. The current club vice president, wrapped by president Joan Laporta, Rafael Yuste, Josep Cubells and Xavier Sala i Martín among other managers, presented his candidacy by highlighting the positive values of ‘Laporta was’ and focusing on the experience and a successful model who has the club living the best period in its history.

With the motto ‘+ Barça’ as a starting point and an aesthetic similar to that used Laporta in the 2003 campaign, Alfons Godall spoke of a project based “on experience and knowledge of the entity” and “in the belief who have lived the best part of our history. ” Godall also had words for a Laporta thrilled for many strains of the event: “We leave a great legacy and to try igualarte duties.

Xavier Sala i Martín was the ‘opening act’ of Godall offering a much more powerful and with some ‘Recaditos’ to Sandro Rosell. Sala i Martín pulled chest of the confidence reposed in Rijkaard as “a vice president gambled on his removal” and noted the courage of Laporta, with Godall always at his side, hiring Eto’o while others were afraid to “be angry” at Madrid and giving coach Guardiola alternative to defending the fortress against the project “samba model.

President Joan Laporta Alfons Godall introduced as “one of the architects of what has been achieved over the years” and added that he is the person “fit” to continue with the project. “I think it is a quiet, focused, responsible and suitable person to lead the quiet strength that should continue this pattern for more Barca Barca,” Laporta said after the presentation of the candidacy of Godall.

The president of FC Barcelona, Joan Laporta, has hinted that elections for president of the Catalan club could be the end of the season, even on a day without football, and would consult this idea to the executive body, including technical, Josep Guardiola.

A round with the date

Laporta has attended this evening at sunset over the candidacy of Alfons Godall, senior vice president of the club, who says he presented his candidacy for election to the presidency Barca. For President Barca, the club will decide the election date “when you consider the best interests of Barca.

“At the end of the season?

“In principle there is no provision that is on the agenda of Vic, unless there is a board member who wishes to put this matter. But it would be hasty. I did not say that would be a game day. I said it would the day when we thought that there was maximum participation, “he argued. “What would that be normal game day, but do not want to unsettle the squad. Here we have to evaluate all the constraints. Perhaps the best solution is to end the season. We would do a series of actions to encourage participation,” he added.

About what situation would definitely be taken to specify the date, Barca president has not wanted to dwell too much, but has indicated that you wish to consult with the executive team of the entity. “I would like all sections of the club, I mean the corporate general direction, to the board and the coaching staff, as well as the technical secretariat, known then and that they believe is right for that is not detrimental the interests and functioning of the club, and their areas of responsibility, “Laporta justified.

Bojan Krkic had to leave for the umpteenth time to strengthen their commitment to the Barcelona. The young Spanish striker said he wants to succeed in the Catalan side, even when such potential is not yet in the first team. 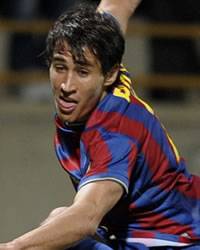 “I do not know that I will do next week. In football goes around and I am very happy at Barcelona. Just keep working and I am concerned here to prove that I can follow,” explained the end-to-Wave FM.

Bojan was related to the English club Arsenal in recent weeks, which had also been a huge challenge to work with Arsene Wenger.

“It’sa great recognition, but Barcelona is the club has given me everything and I’m happy here. It is true that you learn by playing, but in Barcelona you can also learn a lot by playing minimally,” he added.

Josep Guardiola appeared before the microphones for the first time since the confirmation of a contract extension with Barcelona. Thus, the FC Barcelona coach said that delaying the final decision was due to never tense relationship with President Joan Laporta and even flowers filled the top manager of the club.

“Laporta let me do everything. I do not remember a president with whom no unanimity, but it is a pleasure to work alongside. Barcelona gave me more to me than I them, and part of them is the current chair,Pep stated in the press conference.

In addition, the technician also settled the whole issue of the renewal of his contract with the confirmation that will be another year at the club, despite the lack of signature.

“Next year will be the Barcelona coach, but will not sign until the new president.”

“With Laporta are not close friends, but our relationship is excellent. We are not at all agree, obviously. But it was he who gave me the opportunity to be here.”

Real Madrid. “All we did what we have to win again. If the mother took us five points of difference, would be the champions. The sound is bigger there, but maybe I’m wrong. So tranquilito and continue working.