Sadio Mane suffered an injury scare less than two weeks before the start of the World Cup after being forced off during Bayern Munich’s 6-1 demolition of Werder Bremen.

Mane limped off with a leg injury after just 20 minutes of the game, with only 13 days to go before Senegal’s opening match of the tournament against the Netherlands.

But champions Bayern put that blow behind them to thrash Werder and open up a four-point lead at the top of the Bundesliga. Highlights of the Bundesliga match between Bayern Munich and Werder Bremen

Bayern’s goalscoring began in the sixth minute when in-form Germany international Jamal Musiala showed outstanding composure to pick up the ball in the box, sidestep an opponent and slot home with his left foot.

The visitors struck against the run of play only four minutes later, with Anthony Jung wrongfooting goalkeeper Manuel Neuer with a low shot, but Bayern’s pressure was relentless and they went on to score three times in six dizzying minutes to kill off the game.

Gnabry curled in a superb shot in the 22nd minute before fellow Germany international Leon Goretzka added another four minutes later. Gnabry then tapped in his second goal of the evening in the 28th minute from a perfect Leroy Sane assist as Werder were unable to stop Bayern’s runs through the centre.

Gnabry then bagged his hat-trick in the 82nd minute after weaving past four Werder players before France youth international Mathys Tel made it half a dozen goals for Bayern with a solo effort two minutes later.

There was joy for Bayern earlier in the evening when rivals Borussia Dortmund suffered a 2-0 defeat at Wolfsburg, who stretched their unbeaten run to seven matches. 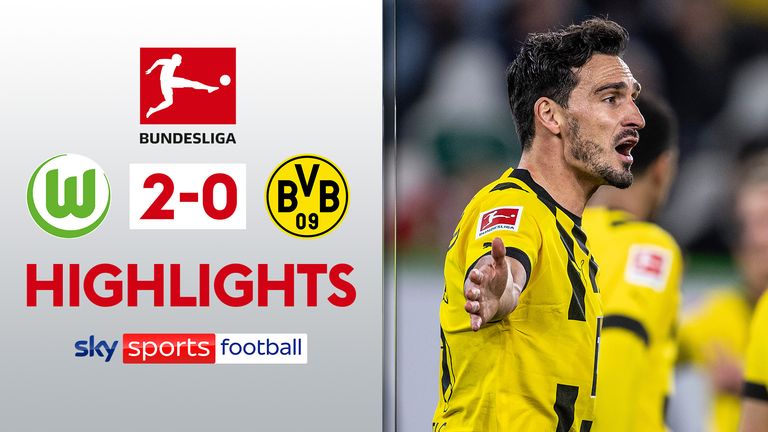 Highlights of the Bundesliga match between Wolfsburg and Borussia Dortmund

The hosts shot out of the blocks, forcing a good save from Gregor Kobel in the third minute before Micky van de Ven nodded in at the far post from a corner three minutes later.

Wolfsburg, who had managed just one point against Dortmund in their last 14 league matches prior to Tuesday, sealed their first win over Dortmund in seven years with a Lukas Nmecha tap-in in stoppage time.

The results leaves Dortmund fourth in the Bundesliga – six points behind leaders Bayern – while Wolfsburg are eighth, one place below Werder Bremen.

Barca fight back after Pique and Lewandowski reds

Barcelona fought back to win 2-1 at Osasuna despite Robert Lewandowski and Gerard Pique – in his final match before retirement – receiving red cards.

Second-half goals from Pedri and Raphinha rescued Xavi’s side after David Garcia had headed Osasuna into the lead from a corner in the sixth minute.

Lewandowski saw red following a second booking in the 31st minute, after which Pique – who was on the bench – was also dismissed after complaining to the referee at half-time.

Yet Pedri equalised from a rebound right after the break and Raphinha came off the bench to score Barca’s winner five minutes from time with a brilliant dipping header from outside the box that looped into the net.

The result means Barcelona go into the World Cup break top of La Liga, five points ahead of second-placed Real Madrid, who host second-bottom Cadiz on Thursday. Osasuna are sixth.

Serie A leaders Napoli extended their winning streak to 10 games and their lead at the top of Serie A to eight points when they beat visitors Empoli 2-0 thanks to a goal and an assist from substitute Hirving Lozano.

The sides were locked at 0-0 at half-time despite the hosts dominating the first 45 minutes, while Empoli never came close to any real chances.

Napoli finally broke the deadlock when Lozano converted a penalty in the 70th minute after Razvan Marin tripped Victor Osimhen inside the box.

Empoli’s luck had clearly run out when Sebastiano Luperto was sent off after picking up a second yellow card for tripping Lozano in the 74th minute.

Lozano then crossed for Piotr Zielinski, who found the net with one touch in the 88th minute.

Brahim Diaz, Ante Rebic and Divock Origi all missed opportunities for the champions, while Cremonese could have snatched victory four minutes into stoppage time when Cristian Buonaiuto shot straight at Ciprian Tatarusanu.

Milan lie second in the standings, eight adrift of leaders Napoli, while Empoli are 14th and Cremonese are 18th, two points from safety.