Barcelona fought back to earn a 2-1 win at Elche on Sunday as a late penalty from Memphis Depay ensured they continued their revival after a difficult start to the season.

????Having fallen as low as ninth back in November, when former coach Ronald Koeman was sacked, Xavi Hernandez’s revitalised Barca have climbed into La Liga’s top three with 48 points, leapfrogging Real Betis in third place.

Mid-table Elche opened the scoring right before half-time when Pedri tried to clear the ball but gifted a perfect assist to Fidel Chavez, who out-ran Dani Alves and scored with an angled shot just inside the right post.

Ferran Torres scored the equaliser in the 61st minute after great play from Ousmane Dembele down the right flank. His cross was deflected by Jordi Alba and the former Manchester City forward, in the right place at the right time, turned it home from close range.

Barca’s winner came after the video assistant referee spotted a handball from an Elche defender inside the area and Depay rifled his penalty into the top-left corner.

Meanwhile, Joao Felix scored twice as he helped Atletico Madrid earn a 3-1 win at Real Betis, ensuring they leapfrogged their rivals into fourth place in the standings.

Atletico are tied on 48 points with third-placed Barcelona, who won 2-1 at Elche, although the Catalans have a game in hand. Both teams trail leaders Real Madrid by 15 points.

Betis, who started the weekend in third place, dropped below Barca and Atletico to fifth place with 46 points from 27 games.

Felix opened the scoring in the first minute with a close-range strike from an Angel Correa cross.

Betis equalised just before the break when Cristian Tello fired home an angled shot from the edge of the box.

Atletico dominated following the break. Felix scored his second after Marcos Llorente led a quick counter-attack before crossing to the Portuguese, who made the final touch from inside the box.

Substitute Antoine Griezmann, who is slowly working his way back from injury, provided the cross that allowed Thomas Lemar to complete the 3-1 victory in the 80th minute.

Elsewhere, relegation-threatened Cadiz boosted their survival chances with a 2-0 win over Rayo Vallecano to move within one point of 17th-placed Granada.

Serie A: Giroud goal sends Milan back to summit

Olivier Giroud’s second-half goal sent AC Milan back to the top of Serie A as they battled to a 1-0 win away at Napoli on Sunday.

Victory means that Stefano Pioli’s table-toppers now have 60 points, two ahead of city rivals and reigning champions Inter – who have played a game fewer – and three more than Napoli in third.

Chances were few and far between in a nervous encounter, with the hosts only managing two shots on target throughout the 90 minutes at the Diego Armando Maradona Stadium.

After a low-key first half in which neither side really threatened, Giroud netted the only goal of the game as he turned in Davide Calabria’s cross-shot four minutes after the break.

Adam Ounas curled one wide for Napoli and Hirving Lozano dragged an effort wide late on as they tried in vain to find an equaliser.

Theo Hernandez and Alexis Saelemaekers were denied by smart saves from Napoli goalkeeper David Ospina on the counter in the closing stages as they sought to seal the victory.

Meanwhile, a first-half goal from Alvaro Morata was enough to give Juventus a 1-0 victory at home to Spezia in Serie A as they tightened their grip on a Champions League spot.

The hosts, who went close on the quarter-hour mark through midfielder Arthur Melo, took the lead after 21 minutes when the Brazilian latched on to a poor clearance from Spezia goalkeeper Ivan Provedel, picking out Manuel Locatelli on the edge of the box before the Italian fed Morata, who netted his first league goal since December.

Emmanuel Gyasi and Kevin Agudelo were both denied by Wojciech Szczesny from close range after the break as Spezia sought a way back into things.

Morata, meanwhile, missed a gilt-edged chance to seal the victory in stoppage time at the end of the game as Juventus held on to secure the win.

Juve move onto 53 points in the fourth and final Champions League spot, where they sit six points above fifth-placed Atalanta, who have played a game fewer.

Fiorentina were made to rue several missed opportunities as they were held to a 1-1 draw at home to Hellas Verona.

Only two points separated the two teams, who were both desperate for a win to close in on the European places.

Krzysztof Piatek fired Fiorentina ahead in the 10th minute, but Gianluca Caprari equalized from the penalty spot for Verona 10 minutes later.

At the other end of the table, Genoa drew 0-0 against Empoli to move within seven points of safety. Venezia also remained in the bottom three as they lost 4-1 at home to Sassuolo. Torino drew 0-0 at Bologna.

Stefan Posch scored the only goal as Hoffenheim beat Cologne 1-0, amid a host of missed chances by both teams, to move up to fourth in the Bundesliga, the last place for Champions League qualification.

Posch’s second-half goal was enough for the visitors to stretch their winning run to four games and move two points clear of Leipzig and Freiburg after their 1-1 draw on Saturday. Nine rounds of fixtures remain.

The Russian invasion of Ukraine again featured prominently in the Bundesliga. Cologne players wore jerseys with ‘Stop War’ written on the front.

John Lennon’s ‘Imagine’ was played around the stadium before players and fans observed a minute’s silence in solidarity with the victims. 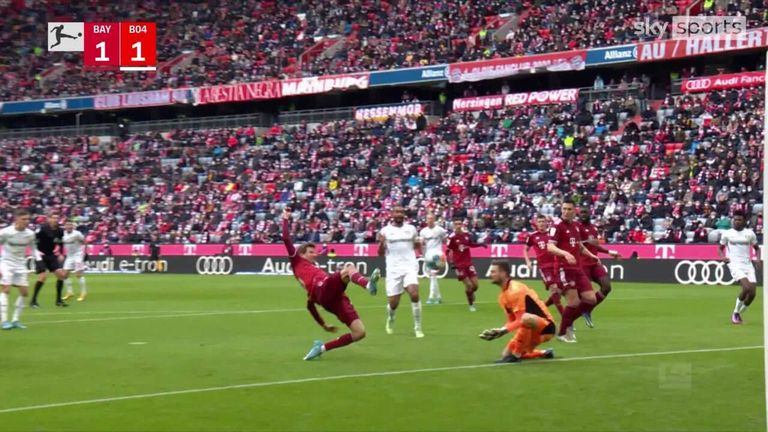 Highlights: Bayern Munich were held to a 1-1 draw by Bayer Leverkusen in the Bundesliga on Saturday

Hoffenheim forward Ihlas Bebou missed several good opportunities to score, while Anthony Modeste missed the home team’s best chance of the first half when he fired over with only the goalkeeper to beat.

Bebou began the second half with a header against the post and Modeste had a goal ruled out for offside before Posch finally broke the deadlock in the 61st minute when he headed in a cross from Germany defender David Raum.

There were further missed chances for both teams, with Hoffenheim’s Christoph Baumgartner hitting the post when it looked easier to score. Cologne substitute Tim Lemperle headed just wide in injury time.

The scheduled earlier game between second-placed Borussia Dortmund and Mainz was postponed on Friday to March 16 due to a coronavirus outbreak at home team Mainz.

Gelson Martins scored a second half winner as Monaco inflicted more home misery on Marseille with a 1-0 victory in their Ligue 1 encounter on Sunday.

Martins reacted quickest to turn the ball in after Kevin Volland’s shot crashed back off the post. The goal was initially flagged for offside but that decision was overturned by the Video Assistant Referee.

Marseille, who have won only five of their 14 home matches this season, remain in third place in the table with 47 points from 27 games. They trail leaders Paris Saint-Germain by 15 points and are two behind second-placed Nice.

Denis Bouanga scored the only goal as St Etienne climbed out of the relegation zone with a 1-0 home win over Metz, while Troyes claimed a crucial victory in their bid for survival away at bottom side Bordeaux.

Bouanga had a first-half goal ruled out by the Video Assistant Referee for handball, but there was no doubt about his effort on 52 minutes as a poor clearance landed at his feet and he thumped a shot into the back of the net.

Metz, who are second-bottom in the table, thought they had a penalty in the closing stages as Falaye Sacko committed a clear foul on Farid Boulaya in the box, but referee Jeremy Stinat overturned the decision after an infringement in the build-up was spotted.

Troyes did their chances of staying up the world of good after a 2-0 win at ailing Bordeaux.

They had a bit of luck early on when Mama Balde’s penalty was saved by home goalkeeper Gaetan Poussin, who then knocked the ball into the net with his trailing leg for an own goal.

The visitors added a second with five minutes remaining having been awarded a second spot-kick, this time converted by South Africa international Lebo Mothiba, who has recently returned from almost two years on the sidelines with injury.

Rennes moved up to fourth with a 2-0 victory over Angers, their third win in succession but a sixth straight loss for their opponents that has seen them tumble down the table.

Benjamin Bourigeaud and Gaetan Laborde scored the goals for Rennes, who are now a point off the Champions League qualification places.

They have leapfrogged Strasbourg, who were held to a third successive draw by Reims. Jean-Ricner Bellegarde put Strasbourg in front, but Jens Cajuste equalised for the home side with six minutes remaining.

Nantes also kept their Champions League hopes alive with a 2-0 win at home to Montpellier. Goals from Randal Kolo Muani and Willem Geubbels sealed the three points. They climb to sixth, five points behind third-placed Marseille.

Defending champions Lille continued their late push for a European spot by routing 10-man Clermont 4-0 to stay level on points with Nantes.