AC Milan surged to the top of Serie A with a 1-0 victory over Sampdoria that moved them a point above Inter Milan.

The France international sent a long kick from outside his penalty area to feed Leo who controlled the ball on the left flank before moving past defender Bartosz Bereszynski to beat Sampdoria goalkeeper Wladimiro Falcone.

It was the 10th goal of the season for the Portugal forward in his 100th appearance for the Rossoneri. Striker Olivier Giroud, who scored both goals in the game against Inter, had his second-half header from close range fingertipped over by Falcone.

AC Milan top the table with 55 points, one clear of Inter in second with Napoli another point back after they shared a 1-1 draw on Saturday. Inter, however, still have a game in hand.

Meanwhile, Bryan Cristante scored a 94th-minute equaliser to rescue a 2-2 Serie A draw for AS Roma at Sassuolo on Sunday, as Jose Mourinho’s side lost more ground in the race for European qualification.

Another league stalemate leaves them seventh with 40 points, two behind Lazio and five behind Juventus in fourth, who are playing later.

“If you had asked me at the start, I would not have wanted a draw, but in the 90th minute, definitely,” Mourinho told DAZN.

“I can compare this match to defeats we had earlier in the season against Verona, Venezia and Bologna. We had chances to draw those games and could have had three points more with three draws.

“It isn’t the result we wanted, but if nothing else we haven’t lost in the last four in Serie A, we have got eight points.”

A Tammy Abraham penalty gave the capital club the lead at the end of the first half, but a mistake from goalkeeper Rui Patricio led to a Chris Smalling own goal for the equaliser, before Hamed Traore completed the turnaround with a well-taken strike.

However, Sassuolo defender Gian Marco Ferrari picked up a second yellow card with 12 minutes remaining and Roma capitalised deep in stoppage time through a Cristante header.

Elsewhere, bottom two Genoa and Salernitana played out a 1-1 draw that did little to help either side hopes of survival, leaving them six and nine points adrift of the safety zone respectively.

Cagliari earned a 1-1 draw at Empoli that took the 18th-placed Sardinians level with Venezia above them on 21 points, while midtable Hellas Verona hammered Udinese 4-0. 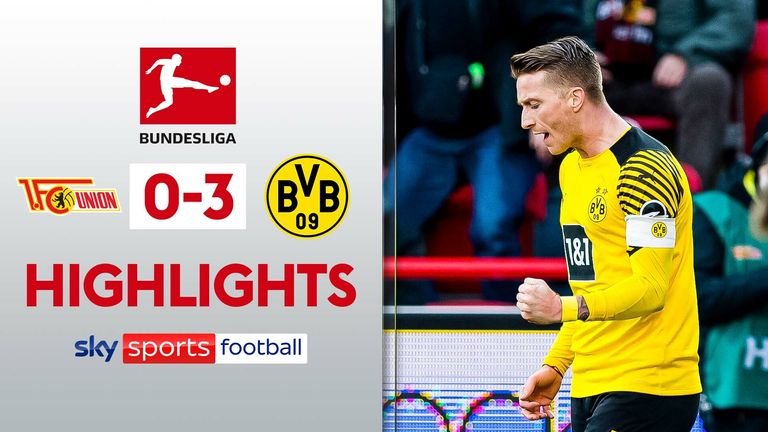 Highlights of the Bundesliga match between Union Berlin and Borussia Dortmund

It also went some way to answering mounting criticism after Dortmund’s 5-2 loss at home to Bayer Leverkusen the previous Sunday, which had allowed Bayern to pull nine points clear.

But the leader’s surprise 4-2 loss at promoted Bochum on Saturday gave Dortmund added incentive to claim its first league win at Union at the third attempt.

Reus opened the scoring in the 18th minute when Mahmoud Dahoud played him in to shoot low through Andreas Luthe’s legs.

Reus scored again seven minutes later when Donyell Malen held off Robin Knoche and Bastian Oczipka to play him through. The Dortmund captain rounded the Union goalkeeper before finishing from a narrow angle.

Raphael Guerreiro scored the visitors’ third from close range in the 71st minute.

Dortmund won without injured forward Erling Haaland due to muscular problems and the club said Gio Reyna did not play because of illness, one game after the United States midfielder returned from a hamstring injury that had sidelined him for five months.

Hoffenheim jumped to fifth by beating relegation-threatened Arminia Bielefeld 2-0 in the late game.