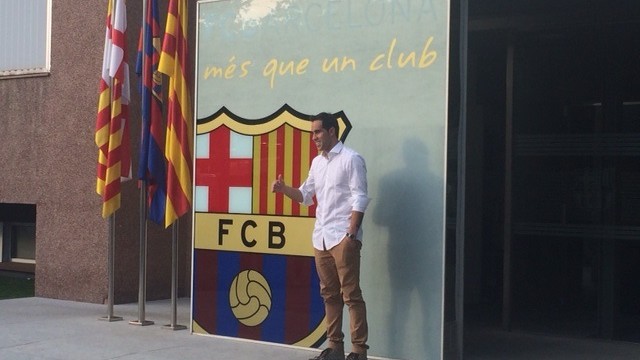 On a busy Monday he’ll take a medical, sign his contract, pose for pictures in his new kit and give a press conference

Claudio Bravo is here. The new goalkeeper arrived in Barcelona on Sunday and was taken straight to the Camp Nou. At 8.00 PM CET he posed for photographs outside the club offices, where he was greeted by the media and a considerable crowd of fans.

He has a busy schedule on Monday. At 9.00 AM CET he has a medical examination at the Ciutat Esportiva, and then at 11.15 AM CET he’ll sign his contract. At around 12.00 PM CET he’ll be appearing on the field wearing his new jersey and after that he’ll be presented at a press conference.

The 31 year old former Real Sociedad player will sign for FC Barcelona for four seasons. Claudio Bravo is the third new arrival after Ter Stegen and Rakitic, in addition to Deulofeu and Rafinha, who have come back from loan, and Masip, who has been promoted from the reserves.