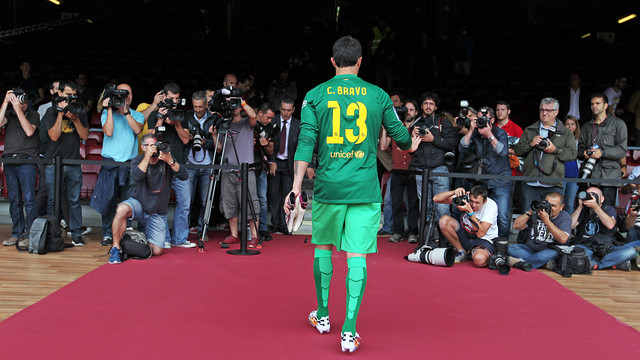 The footage shows an inside view of the Chilean’s first day in the FC Barcelona strip. On Monday he passed his medical, arrived at the Camp Nou, signed his contract, posed for official photographs and gave a press conference

Claudio Bravo arrived in Barcelona on Sunday and on Monday he officially became an FC Barcelona player. The Chilean keeper passed his medical first thing on Monday morning at the Ciutat Esportiva, and then he made his way to the Camp Nou. At the Stadium, the team’s new No.13 signed his contract in the presence of President Josep Maria Bartomeu and Vice-President Jordi Mestre. He then visited the dressingroom and donned the FC Barcelona strip for the first time.

Due to the heavy rain in Barcelona, Bravo posed for pictures in the Barça kit under the grandstand of the Camp Nou. He then gave a press conference in the Ricard Maxenchs Pressroom. The above video gives an inside view of team’s latest addition on his first day as an FC Barcelona player.