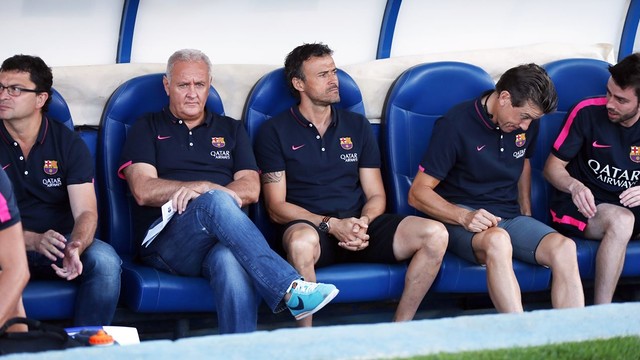 All 23 players got to play, and the visitors dominated from start to finish

The Colombino Trophy match between Recreativo Huelva and Barça will always be remembered for being Luis Enrique’s debut as first team manager. In a game decided by a solitary second half goal from Joan Roman, most of the players were from the B team. Goalkeeper Ter Stegen got to make his debut, and although he didn’t have much to do, on the few occasions when he was called upon, he did well.

There were only three first team players in the starting eleven (Masip, Montoya and Sergi Roberto), with the other eight (Edgar Ié, Bagnack, Grimaldo, Halilovic, Babunski, Munir, Adama and Dani Nieto) all coming from the reserves. Playing a rigid 4-3-3 system, it was the visitors who took the initiative almost from start to finish, with Halilovic in particular being singled out for praise. But all that possession was transformed into very few clear-cut chances.

Luis Enrique fielded a completely different eleven in the second half, four of which were first team players – Ter Stegen, Bartra, Afellay and Deulofeu. It would have been nice to have seen more of what the German keeper could do on his debut, but Huelva did very little to threaten. Once again, it was all Barça, with Deulofeu the most incisive man on the pitch. It was his 66th minute shot that led to the only goal of the night. All the keeper could do was parry the ball away, but it fell straight into the path of Joan Román, who coolly slotted home.

Dongou came on to ensure that all 23 players that had travelled to Andalusia got some time on the pitch, but by now the game had become a Barça monologue, with Recre going for long periods without even touching the ball. With minutes to go, Deulofeu sent the ball thundering off the crossbar, but it all ended 1-0. It is hard to draw too many conclusions from this game, but all round it was a strong performance, and Barça deservedly got to lift the Colombino Trophy.