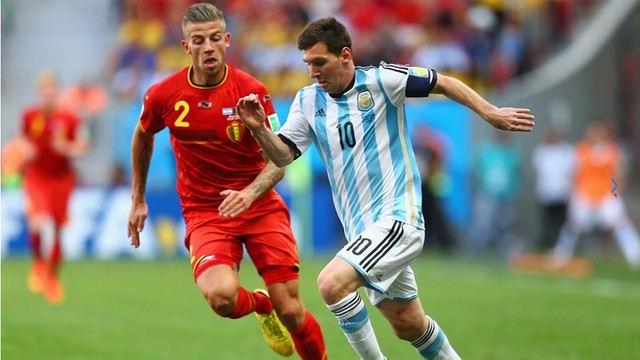 Messi and Mascherano played the full 90 minutes of Argentina’s win over Belgium. An early goal by Higuaín made the difference

Argentina is through to the semi-finals of the World Cup after a wait of 24 years.  Key performances from Leo Messi and Javier Mascherano and an effective defence were too much for Belgium.  An eighth minute goal by Higuaín was enough to seal the win.

Despite a number of changes in the Argentina line-up, Mascherano and Messi kept their places in midfield and attack.  Whatever Sabella had in mind, it worked a dream.  A move started by Messi in the 8th minute ended with Higuaín firing an unstoppable – and match winning – volley past Courtois.

Argentina sat back to soak up the Belgian pressure, with Di María, Messi and Higuaín always alert for a counterattack.  However, when Di María limped off after half an hour, it fell to Messi to rally his team-mates.  He almost scored in the 40th minute when his 20-yard free kick flew inches over the crossbar.  Moments later, Mirallas had his side’s best chance of the match to equalize.

Argentina looked the stronger of the two teams in the second half and Higuaín culminated a fast counterattacking move in the 55th minute with another fierce shot that clipped the crossbar.  Belgium boss Marc Wilmots made two attacking substitutions and Lukaku in particular added depth to Belgium’s game.  There were few chances in the final part of the match with the Argentina defence dealing smartly with the aerial threat posed by Van Buiten, Fellaini and Lukaku.In the dying seconds Messi almost added a second but was denied by Courtois.

Messi and Mascherano will face either Holland or Costa Rica in the semis.