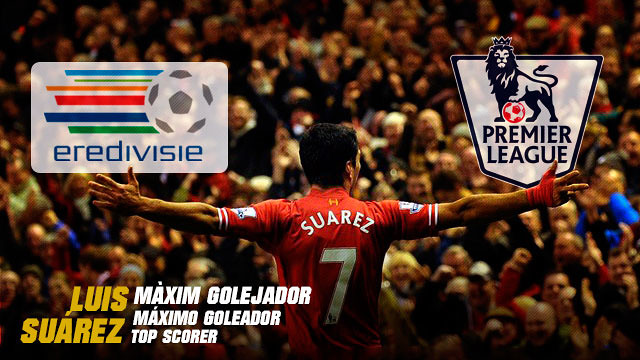 Luis Suárez is one of just two players who can say that they have topped the goalscoring charts in both the Eredivisie and the Premier League. The only other player to have achieved that is Dutchman Ruud Van Nistelrooy, and that’s despite the likes of Dennis Bergkamp and Robin Van Persie having had the possibility.

Luis Suárez was the leading goalscorer in last season’s Premier League with 31 goals, ten more than second placed Daniel Sturridge, his Liverpool team-mate. And that was despite starting the campaign later than anyone else due to suspension. His goals meant that for the first time in many years, Liverpool were serious candidates for the title. Van Nistelrooy was top goalscorer in the Premiership with Manchester United in 2002/2003, scoring 25 goals. Like Suárez, that still wasn’t enough to win the championship for his club.

Before that, the Uruguayan had also finished as top goalscorer in the Eredivisie. That was with Ajax Amsterdam in 2009/2010. His 49 goals helped his side to become Dutch champions and also made Suárez the Golden Boot winner.

Van Nistelrooy was top scorer for two consecutive seasons (1998/1999 and 1999/2000) with PSV Eindhoven. Like Suárez, the Dutchman also won an Eredivisie title and leading goalscorer trophy in the same season, 1999/2000.

Now he has come to Spain, Luis Suárez has the chance to also become top goalscorer in La Liga, something Ruud van Nistelrooy also did for Real Madrid in 2006/2007.