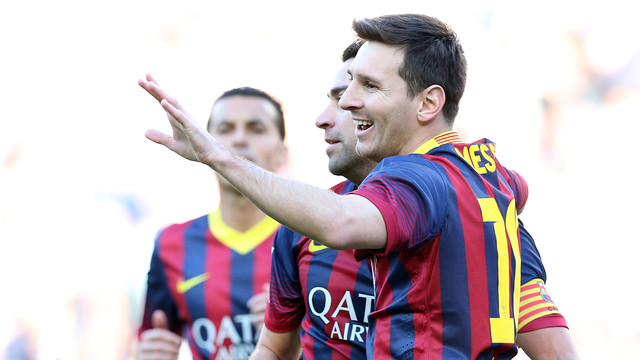 According to the President, “A few days ago we adapted his contract and he is very happy here”

On Xavi, he affirmed that “he has earned the right to decide what is good for himself”

As for signings, he confirmed that “we still need defenders and a forward”

Josep Maria Bartomeu affirmed that “Leo Messi will lead the important renovation” that is taking place in the FC Barcelona first team ahead of the 2014/15 season. According to the President, who on Wednesday offered a press conference, “A few days ago we adapted his contract and he is very happy here”.  In this regard, he said that Messi is not transferable.” [[CITA_1]]. The President also referred to the case of Xavi Hernandez: “He has earned the right to decide as he sees fit and we will help him as much as we can. If it was another player, it would be us who would say what had , to be done, but we will give Xavi time to decide. The day he leaves he will be remembered as the most successful player we’ve ever had. He is the essence of our game”.

Asked about new signings, he said: “We still need defenders and a forward”. In this regard, he clarified that Andoni Zubizarreta, Jordi Mestre, Raúl Sanllehí, and Antoni Rossich are the people who are leading the negotiations, which can’t be published yet. In any case, according to Bartomeu, “they are working with names that excite me”, and he warned that “things will happen” until all signings are completed. That is, players are expected to come in, but also leave as well. [[CITA_2]]. Bartomeu also commented on the situation of Alexis Sanchez: “There are several teams interested. We need him, he is essential to our game, but we getting calls from many clubs“.

Finally, the President valued Cesc Fabregas leaving: “He was a player wanted by Josep Guardiola and the technical team. It took two years to sign him and I think the Club has treated him very well The decision to change teams is good for him and hope it will also be good for us”. Both in Cesc’s case and in the Valdes and Pinto cases, Bartomeu thanked them for their contribution to the Club.

The day he leaves he will be remembered as the most successful player we’ve ever had.
We need Alexis, he is essential to our game, but we getting calls from many clubs.