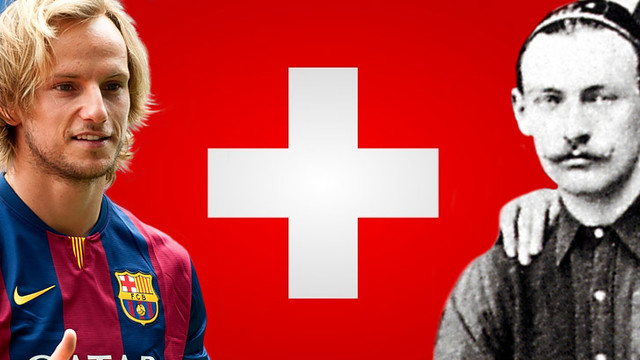 Although he has Croatian nationality, new Barça player Ivan Rakitic was born in the Swiss town of Möhlin. This fact helps to remind us of the strong ties between Barça and Switzerland in the Club’s early years

The Club history is well known, but it’s worth remembering again. Born in Winterthur, a Swiss man named Hans Gamper, together with his compatriot and friend Walter Wild, founded FC Barcelona, towards the end of the nineteenth century.

When FC Barcelona was founded in the Solé Gymnasium, on 29 November 1899, of the twelve founding members who stamped their signatures on the memorandum of association there were three Swiss, as besides Wild and Gamper there was Otto Kunzle, another buddy from the area of Sant Gervasi de Cassoles, where Gamper lived. In that meeting Walter Wild was appointed president of FC Barcelona, the first in its history

Swiss in the early years

Amongst these, in addition to the extraordinary figure of Joan Gamper (120 goals in 51 games), it’s worth highlighting George Meyer, a superb midfielder from heroic times who played with a glass eye.

The case of Luis Cembranos

A great leap in time takes us to the 1994/95 season, when midfielder Luis Cembranos, born in Lucerne (Switzerland) but raised in Leon, got to play in six official matches (three in la Liga and three in the Champions League ) for the FC Barcelona first team, before being transferred to Espanyol