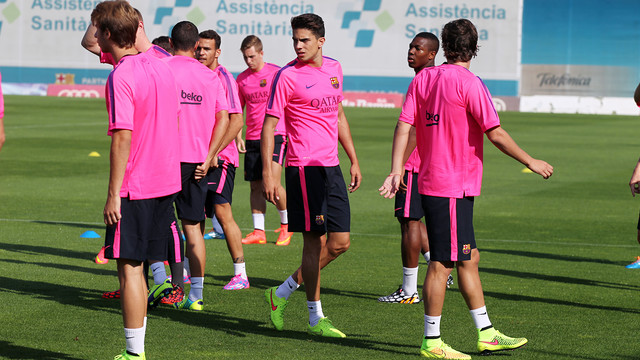 FC Barcelona 2014/15 is in motion, and the new manager took his squad onto the pitch for the first time this season

Thirteen players were involved, with Adriano Correia working in isolation

Barça 2014/15 is in motion. After taking medical tests on Monday, the first team trained for the first time under Luis Enrique and the rest of the coaching staff. The ten first team players at the Ciutat Esportiva were Ter Stegen, Masip, Montoya, Bartra, Sergi Roberto, Rafinha, Deulofeu, Afellay, Tello and Bojan, while Adriano Correia did specific work in the gym.

They were joined by thirteen members of the reserves who are helping boost the numbers until the World Cup stars return. These were Bagnack, Edgar Ié, Patric, Diagne, Grimaldo, Samper, Halilovic, Munir, Sandro, Dani Nieto, Joan Román, Dongou and Adama.

They did plenty of work with the ball in their first session. They’ll train once again this evening at 6.30 PM CET, also at the Ciutat Esportiva Joan Gamper. Luis Enrique has arranged double sessions every day except Thursday, when there will only be a morning session, to get the players ready for their first preseason friendly, away to Recreativo Huelva.