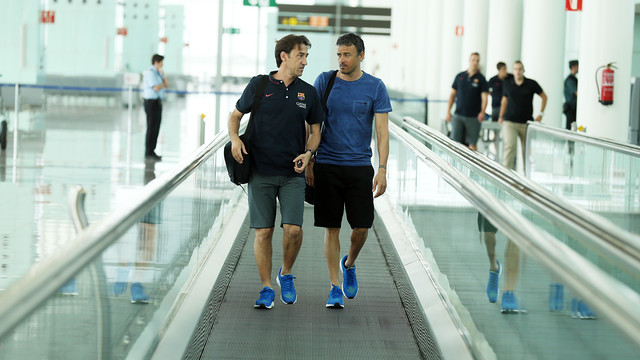 This morning FC Barcelona travelled to Huelva, where they play Recreativo this evening

The Barça first team are already in Andalucia, where they will play for the Colombino Trophy tonight. Barça left the Ciudad Esportiva at 9.15 a.m. to go to the airport. From there they took off for the flight to Seville and, from the Andalucian capital, travelled by bus to Huelva.

Heading up the expedition are Barça Vice President, Jordi Mestre, and director Jordi Moix. Also present is the Sports Director Andoni Zubizarreta. Coach Luis Enrique Martinez has called up 23 players (7 from the first team and 16 from the reserves).

Recreativo Huelva will face Barça in the Colombino Trophy which kicks off at 8.45 p.m. It will mark Barça’s 2014/15 season debut, and forms part of the events to celebrate the 125th anniversary of the Andalucian club