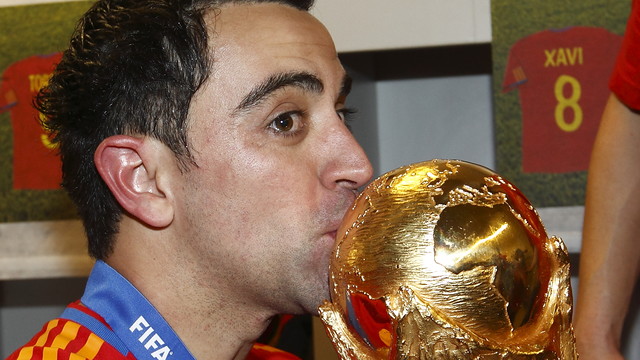 With his call-up for the World Cup in Brazil, Xavi Hernandez will play in his fourth World Cup, a statistic which very few players reach, and makes him the first Barça player ever to achieve it

Korea and Japan 2002, Germany 2006, South Africa 2010, and now Brazil 2014. These are the four World Cups that Xavi Hernandez will have taken part in. The midfielder from Terrassa was included in Del Bosque’s list of 23 players, which makes him a fixture for almost 15 years in the top competition for national teams. So far he has totalled 14 matches in this competition.

First Barça player to do so

This statistic places Xavi as the first Barça footballer in history to be involved in four World Cups. Puyol has played in three (2002, 2006, 2010) and for Messi, Fabregas, and Iniesta it will also be their third participation, after playing in 2006 and 2010, although Cesc took part in the previous two as an Arsenal player.

Xavi’s presence so far in the last three World Cups has been marked by his high involvement in each of these. In his first World Cup in Japan and Korea in 2002, Xavi played in three of the five matches, in Germany in 2006 he played in all four matches for Spain, and in South Africa, where they won the title, he played in all seven matches.