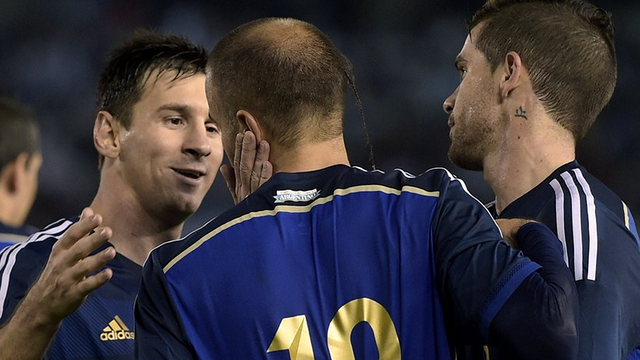 Argentina, with Leo Messi getting an ovation from his opponents, had little trouble beating Trinidad & Tobago 3-0 at the Monumental in Buenos Aires in a World Cup warm-up match last night.

Rodrigo Palacio opened the scoring from a corner in the first half, and after the break FC Barcelona’s Javier Mascherano scored his first goal for his country in seven years by converting the rebound after his club colleague Messi had sent an exquisite free kick onto the post. Maxi Rodríguez scored the third in the 61st minute after a generous pass from Palacio.

Chile were being held by Northern Ireland until the last ten minutes of their game. The entry of substitutes Alexis Sánchez, Eduardo Vargas and Pinilla made every difference, and two late goals left it 2-0 to the home side in Valparaiso.

Alexis laid up the first goal for Vargas in the 79th minute and three minutes later he supplied his second assist of the night, this time for Mauricio Pinilla.