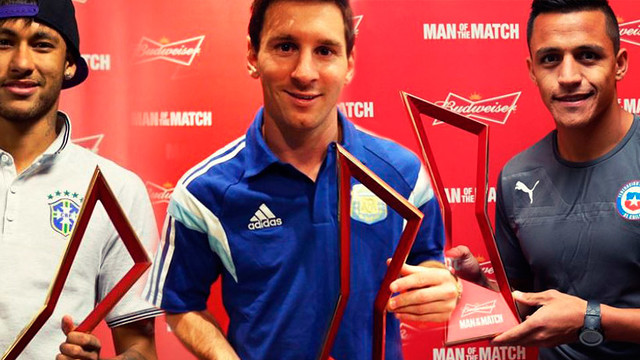 Neymar, Messi and Alexis were all voted FIFA Man of the Match in their debuts at the Brazil 2014 World Cup

All of the FC Barcelona’s players competing at the World Cup in Brazil have played their first matches, and no fewer than three of them were voted FIFA Man of the Match in their respective encounters. Neymar was first, Alexis was second, and last night Messi became the third following Argentina’s win.

Neymar was the star as Brazil came from behind to beat Croatia. He scored twice in his 88 minutes on the field and became the first Man of the Match of the tournament thanks to a dazzling display that grabbed headlines all around the world.

The day after, his Barça colleague Alexis was handed the same accolade after scoring the opener and then setting up the second for Valdivia as his Chile got off to a winning start, 2-1, against Australia.

The last Barça players to get their World Cup bids under way were Messi and Mascherano for Argentina. Last night they beat Bosnia & Herzegovina 2-1, with Messi scoring an absolute beauty in the 65th minute. The move started in combination with Higuaín and then Messi beat several defenders before slipping the ball tight next to the post, leaving the Bosnian keeper with no chance. After the game, he was announced as the Man of the Match.

Not only that, but two of the other Man of the Match awards handed out so far have gone to former Barça players, namely Touré Yaya of the Ivory Coast and Giovani dos Santos of Mexico.