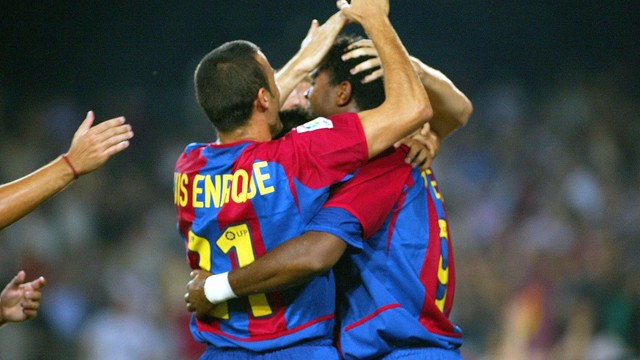 The former FC Barcelona manager and player, who are now together in charge of the Dutch national team, approve of the appointment of former colleague Luis Enrique

Louis Van Gaal and Patrick Kluivert were together at Barça with Luis Enrique. Now in charge of the Dutch national team, the duo approve of the Asturian’s appointment as the new FCB first team manager.

Van Gaal, who managed Luis Enrique during two separate stints at Barça, remembers his former charge as “an important player. He was always the number 10, which for me is the most important position in the Barça system. He scored a lot of goals for Barça. He’s a passionate and intelligent person. He could be the right manager for Barça, but as ever, we’ll have to wait and see. But I do think that he was a good choice.”

Kluivert has blind faith in the ability of Luis Enrique to deliver the goods. “I am very happy for him and from here I’d like to wish him all the very best. He has managed Celta Vigo and also did some great things as manager of Roma. Perhaps what Barça need right now is a man of character like Luis Enrique. I’m sure he’ll be a success and will be able to get the Barça sentiment across. He’ll be a great Barça manager, just like he was as a player.”