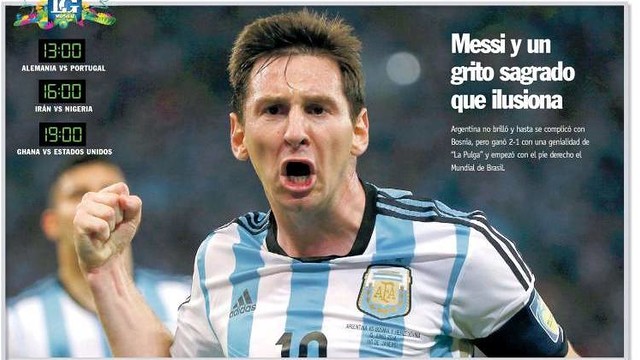 Against Bosnia Herzegovina, Messi scored his second World Cup goal and his first for eight years. His first World Cup goal was scored against Serbia in a 6-0 win at Germany 2006.

Most Argentinian papers have the image of Leo Messi on their covers after the FC Barcelona striker impressed at the Maracanà in Rio de Janeiro last night, scoring one of the goals of the tournament against Bosnia Herzegovina.

“The Brazilians supported Bosnia” says national sports daily Olé. “But they got a taste of what might be to come. A great goal from Leo … and a team that frightens when it attacks.” “Argentina suffered, but won thanks to a screamer from Messi” says El Capital, La Gaceta spoke of “Messi and a sacred scream that brings hope”, while Clarín described how “the whole country was paralysed and then erupted when Messi scored.”

But the paper still wasn’t over impressed with the team in general, commenting that they “need to improve to keep its hopes alive.” El Día was also unconvinced, claiming on its front page that in a tighter game than expected “Messi made the difference.” La Nación was also somewhat negative, describing “a two-faced win. The team changed in time but left a lot of doubts.” And El Gráfico shared the general indignation at how “the Brazilian supporters booed Messi throughout the whole match.”

But it wasn’t just in Argentina that the Barça star made the front pages. His image appears on the cover of Folha de Sao Paulo next to the single word: “Decisive.” And in Italy, Corriere dello Sport went with “Messi, what a goal in the Maracana!”