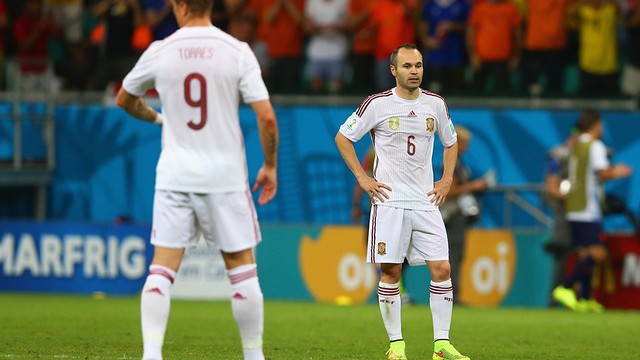 Five Barça players started for Spain, who were comprehensively beaten in their first game of the 2014 World Cup

Louis Van Gaa’s side hit back after a first half Xabi Alonso penalty with goals from Robben (2), Van Persie (2) and De Vrij

Reigning World Champions Spain were hammered 5-1 by Holland  the team they beat in the South Africa Final four years ago, in their opening game of their title defence. A first half Xabi Alonso penalty was cancelled out just before the break by Robin Van Persie and after the break, Van Gaal’s men simply steamrollered Del Bosque’s side to pull off one of the competition’s most famous wins.

There were five Barça players in Spain’s starting XI -Piqué, Jordi Alba, Sergio Busquets, Xavi and Iniesta. Xavi was instrumental in his team’s early chances, twice setting Diego Costa free – the Atletico man fluffed his first, but was brought down by De Vrij as he raced onto the second through ball on 26 minutes and Xabi Alonso made no mistake from the spot.

A brilliant reverse pass from Iniesta set Silva free on goal on 42 minutes, butteh City man tried to chi his shot and the keeper was able to save. That proved an expensive miss as almost immediately afterwards, Blind found Van Persie in space between the centre halves and headed spectacularly past Casillas to equalise.

Whirlwind of Dutch attacks after the break

The second half was a whirlwind of Dutch attacks, with Robben giving them the lead on 53 minutes after getting the better of Piqué and 10 minutes later is was 3-1 when De Vrij scored after what looked to be a foul on Casillas.

Del Bosque brought on Pedro, Torres and Cesc,but there was no stopping Holland who finished off the game with further strikes from Van Persie (72) and Robben (80).