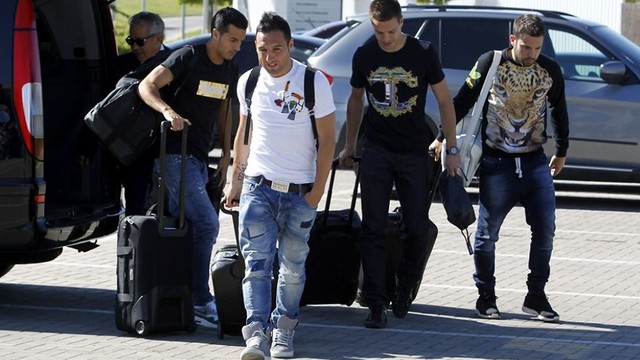 The Spanish and Cameroon National Teams are travelling to their World Cup headquarters in Brazil, this Sunday. The Argentinian National Team will travel on Monday

The World Cup is getting closer. The last national teams which are not yet in Brazil are beginning to travel to the headquarters of football for the next five weeks. The Spanish team, with seven Barça players, are travelling this Sunday from the U.S.A. to Brazil, whilst Cameroon, after calling a strike in disapproval of the premiums they were offered, and delaying their flight, will finally travel tonight. Messi and Mascherano will travel with the Argentine National Team on Monday to Brazil.

It’s worth remembering that these three teams played their last friendly before the World Cup Finals on Saturday. Spain beat El Salvador 2-0; Cameroon won 1-0 against Moldova, and Argentina beat Slovenia 2-0. The ten Barça players within these teams, with the exception of Piqué, all played some minutes

Messi: “We’re going there with tons of expectation”

Following the Argentina match, Messi stressed the optimism surrounding the national squad: “The World Cup is really tough and anything can happen, but we will fight for the title”, and added that “We are all very excited, and now comes the moment of truth. We’re going to Brazil with tons of expectation”.

On the other hand, remember that Brazil, with Alves and Neymar Jr,  and Chile, with Alexis Sanchez, have been in Brazil for some days now