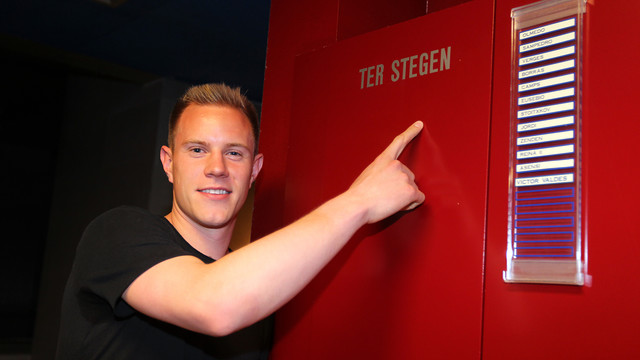 Jan Lustig, who writes for ‘Kicker’, describes Marc-André ter Stegen in an article published in the latest issue of BARÇA MAGAZINE

Jan Lustig writes for German magazine ‘Kicker’ and particularly about Borussia Mönchengladbach. In the latest issue of BARÇA MAGAZINE he offers an in-depth analysis of Marc-André ter Stegen, Barça’s first signing for the 2014/15 season.

What follows is an English version of the Jan Lustig piece, which was originally titled ‘Talent and personality between the posts’:

There was something a little suspicious about what Marc-André ter Stegen said back in September 2011. The goalkeeper had just been promoted to the Borussia Mönchengladbach first team and had less than half a year’s Bundesliga experience when he was asked “What European club fascinates you?” Ter Stegen’s answer sounded like a declaration of love: “Without a doubt, FC Barcelona!”

From striker to keeper

But the move to Spain is a turning point for the young German. Until now, his whole life has been about ‘Borussia’ and ‘Mönchengladbach’. Mönchengladbach, a city of 250,000 people in the west of Germany, where Marc-André ter Stegen was born. Borussia where he played for 18 years. It was in 1996, when he was just 4, that his grandfather registered him for Borussia, when nobody had any idea what a great goalkeeper he was going to become, although what Ter Stegen really wanted to be was a striker. He played outfield right up to U17 level, but if ever there was no regular keeper available for a game, Ter Stegen would stand in. And he was so good as a substitute goalkeeper that he eventually changed position for good. “Looking back, that was the best decision I ever made”, remembers Ter Stegen.

But he has retained several facets of his former outfield position. He often comes out of his net to act as a kind of sweeper and he’s very safe with the ball at either of his feet and great for getting the ball forward. Those are the distinguishing factors of Ter Stegen as a goalkeeper. “It has always shown that Marc-André was once an outfield player”, says goalkeepers coach Uwe Kamps, who not only worked with Ter Stegen in the first team but in the youth teams as well. “He has an incredible talent for anticipating situations, but that’s just one of his many qualities”. According to one of the top goalkeeping experts in Germany, Ter Stegen has no particularly weak points. He’s solid between the posts, a great shot-stopper and very hard to beat in the one-on-one. Ter Stegen is strong with his feet and oozes personality as a goalkeeper.

Stats show how important Ter Stegen was for Borussia. Since his Bundesliga debut in April 2011 against Cologne (5-1), Ter Stegen has been involved in 6,500 actions, more than 60 a game. More than 1,000 more interventions than the next goalkeeper in the Bundesliga ranking. “Ter Stegen is one of the best goalkeepers in the world. He’s very good with his feet “, said former Barça and current Bayern manager Pep Guardiola recently. Borussia Mönchengladbach manager Lucien Favre agrees that “Marc-André is one of the best keepers in the world and he’s still very young. The future is his”.

Young goalkeepers inevitably make mistakes as part of their learning process. His biggest was the own goal he scored when playing in goal for Germany against the United States last summer. And he made the same mistake in the domestic championship last year against Braunschweig. But what’s outstanding about Ter Stegen is his mental strength. Rather than letting these things affect him, he uses them to get better. “Marc-André has enormous mental strength. That’s what you need from a goalkeeper”, says Uwe Kamps. And Ter Stegen himself once said: “When I look at my mistakes, I feel happy about those experiences. Because I know that these things haven’t put me off and that I have always been able to perform again. The way I’ve dealt with these things makes me feel positive about the future”.

The private side of Marc-André

Talented, hard-working, disciplined, ambitious, self-confident and self-analytical – his former coaches use a wide range of words to describe Marc-André ter Stegen. But he’s not fond of discussing himself and his objectives and prefers to keep his private life behind closed doors. “I try to keep my private and professional lives separate, that’s important for me”, he says, and gives very little away about his life outside of football. The few things he has revealed are that he prefers to avoid parties and clubs and is more likely to go out to see a movie, to play with the Playstation, or study Spanish. And he almost always wears a new pair of gloves for every game. But he did go public at Christmas 2012, when he used to Facebook to start a search for his dog Bali, who got hit by a car. In a state of shock after the accident, the dog went off running and hundreds of Borussia fans helped him to look for Bali. But one day later, the dog came back to the house he shared with his girlfriend, Daniela, who is also coming with him to Barcelona. Although Ter Stegen seems serious and reserved to those who don’t know him, he is a nice lad with a great sense of humour, and who was always much admired among his Borussia team-mates. As Lucien Favre has said: “The team is losing a very important member, not just a great goalkeeper but also a great person”.