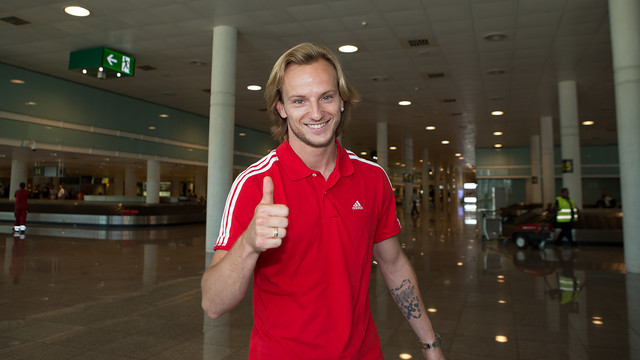 The midfielder arrived in Barcelona this Monday afternoon, he will be officially presented as an FC Barcelona player on Tuesday

Ivan Rakitic has arrived in Barcelona. The aircraft carrying the Croat international touched down at El Prat Airport, and thus begun the player’s first day as a blaugrana. At midday the former Sevilla player bid farewell to the Andalusian fans and then boarded his flight to Catalonia.

Upon arrival, Rakitic went to the Club’s installations at the Camp Nou to pose with the FC Barcelona shield in front of the Club offices. A large number of media representatives were there to capture the player’s first moments as a member of the FC Barcelona roster.

Ivan Rakitic will be officially presented as an FC Barcelona player on Tuesday.