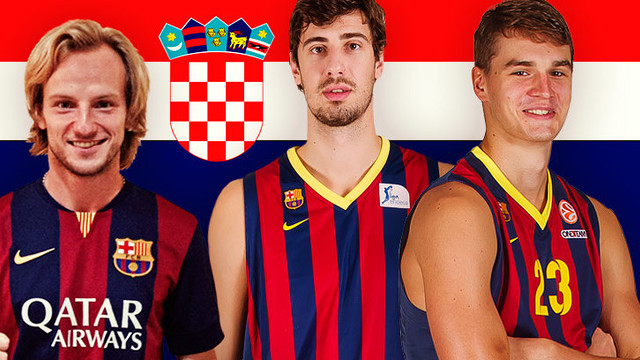 Tomic, Hezonja and Halilovic have all followed similar paths, while Rakitic feels Croatian despite being born in Switzerland

There was already a close link between Barça and Croatia in the 2013/14 season through its basketball section and Ante Tomic and Mario Hezonja. But following the arrivals of Ivan Rakitic and Alen Halilovic, the connection has shifted to the football team too.

Rakitic has joined the first team after playing a key role in the Sevilla midfield, while 18-year-old Halilovic will be playing for Barça B.

Tomic, Hezonja and Halilovic have all followed similar paths from their home country to Catalonia. All three were born in the beautiful coastal city of Dubrovnik, and all three spent part of their sporting careers in the capital, Zagreb.

Both of the basketball players were at KK Zagreb before heading west. Tomic was there from 2004 to 2010, and Hezonja immediately after from 2010 to 2012, which is where he turned professional before joining Barça B. Halilovic also played in the capital with Dynamo Zagreb, where he was just 16 when he became the youngest player ever to make his top flight debut.

At the Palau Blaugrana, the arrivals of Halilovic and Rakitic will therefore be especially welcome. “I only know Halilovic” says Mario Hezonja. “In fact I know him and his brother personally because we have friends in common. I know he’ll do very well here, Barça fans will be surprised by what a top quality player he is.”

“I’m not much of a football fan and have never had the pleasure of meeting either Halilovic or Rakitic,” says basketball centre Ante Tomic. “But I hope they both do well here at Barça. I do know that Halilovic is of Bosnian origin and played in Zagreb; and that Rakitic is of Swiss origin. I’m sure they’ll both be very good signings”.

Ivan Rakitic is different to the other Croats. He wasn’t born in the country and never played for any of its clubs. He was born in 1988 in Möhlin, Switzerland and came up through the ranks at FC Basel before later playing for Schalke 04 and Sevilla. He represented Switzerland from the U17 to U21 levels, but at full international level, he made the decision to switch to his parents’ homeland of Croatia, and it is with that country that he is currently playing at the Brazil 2014 World Cup.

Halilovic and Rakitic are not the first Croatians to play football at FC Barcelona. Goran Vucevic and Robert Prosinecki both wore the famous jersey before them