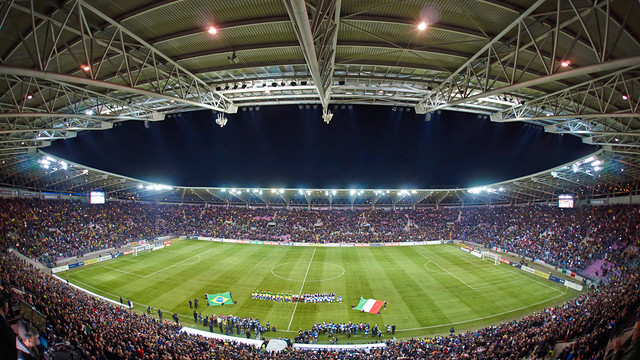 Bartomeu: “It will be an excellent opportunity to continue getting our first team squad against a side with the potential of SSC Napoli”

“FC Barcelona will be playing this game in Geneva against a side with a lot of potential and history, SSC Napoli. It will be an excellent opportunity to continue getting our first team squad into shape under Luis Enrique, including this summer new signings, two weeks before the season starts. The level of the opponent, the quality and drive of our players and the atmosphere in the stadium will be essential ingredients for the supporters to enjoy a great show”.

De Laurentiis: “SSC Napoli is very happy to play in Geneva against one of the strongest and most prestigious teams in the world”

“SSC Napoli is very happy to play in Geneva against one of the strongest and most prestigious teams in the world to get ready for the next season. Besides, Geneva is a perfect place for such a match, and also due to the presence, in Switzerland, of many Italian supporters, many of them from Naples.”

FC Barcelona’s preseason is gradually taking shape and the latest summer opponent has been announced as SSC Napoli, who Barça will face next August 6 at 20.00 CET in the Stade de Genève, Switzerland. The other opponents that have already been confirmed are OGC Nice, HJK Helsinki and Club León, the latter in the Gamper.

The game in Geneva will be a good test for the team as it prepares for the new season, which will start just over a fortnight later. Luis Enrique will have the first squad available to play against a side whose history and players will demand the very best of the Catalans.

Founded in 1926, Napoli is one of the most historic clubs in Italian football, and has won two Serie A titles plus 5 Italian Cups, one Italian Super Cup, one UEFA Cup, one Cup of the Alps and one Anglo-Italian Cup. Last season, the side managed by Rafa Benítez came third in the Italian championship, enough to earn a Champions League place, and beat Fiorentina 3-1 in the final to win the Italian Cup.

The friendly will be a rematch of the Joan Gamper Trophy at the Camp Nou in August 2011. Barça won 5-0 that day, but it was not the first time they had met. In May 1978 they played a friendly at the San Paolo in Naples that ended in a 1-1 draw.

The venue this time will be the Stade de Genève, inaugurated in 2003 and with the capacity for 30,000 spectators, the third biggest in Switzerland. Neither side has ever played at the stadium before, although some of their players have, for it was used for a friendly between Spain and Chile last September, which ended 2-2.

Tickets for this game will go on sale on June 19 at 14.00 CET and start at price of 40 euros (CHF50). They can be exclusively purchased from TicketCorner outlets and its official website at www.ticketcorner.ch.

The game against Napoli will be the second friendly that FC Barcelona will play in August. Four days earlier, on the 2nd, they will have played OGC Nice at the Allianz Riviera, and a few days later, on August 9, they’ll be facing HJK Helsinki at the Olympic Stadium in the Finnish capital. The other preseason friendly that has already been confirmed is the Joan Gamper Trophy match on August 18 against Club Leon of Mexico, where former Barça star Rafa Márquez is currently playing.