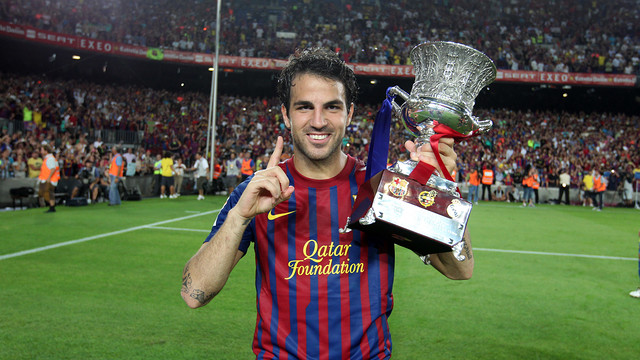 The midfielder is leaving FC Barcelona after scoring 42 goals in 151 matches. There has been a downward trend in his stats every season at the club

Cesc Fàbregas is leaving FC Barcelona, three years after re-joining the club from Arsenal. His return of 42 goals in 151 appearances is an impressive tally for a midfielder, mainly because he has also been played frequently in the ‘false centre forward’ role that is so popular at Barça. He has won 106 games, drawn 29 and lost 16.

Cesc left Barça for the Gunners when he was just 16, and stayed in London for eight successful seasons (2003-2011). He became one of Arsenal’s most iconic players, but there was much hope among Barça fans that he’d return home one day, as he did on August 15, 2011. In all his time with Arsenal, he had only won one FA Cup and one Community Shield, yet on returning to his native Catalonia, he won two further titles in his first two games . the Spanish and European Supercups, and scored three goals in his first four appearances. Guardiola had been right to bring Cesc back home. He slipped right back into the FCB system as if he’d never been away.

But despite glowing starts to each campaign, Cesc’s contributions to the cause gradually decreased as each season drew to a close. From being someone who joined in with the attack, supplying and scoring goals, the magic tended to fade later on in each season. He only scored one, six and one goals in the last 24 games of each season. For some reason, he was never as good in the second half of a season as in the first.

But Cesc was always a favourite choice of the managers. He played 48 games under Josep Guardiola and the same number under Tito Vilanova, while Gerardo Martino used him in 55 games, making him the third most used player of Barça 2014/15, topped only by Sergio Busquets and Javier Mascherano.

He is leaving with memories of a hat-trick against Mallorca and six braces, including the 5,500th league goal in Barça history, and six medals from one Liga, one Spanish Cup, one Clubs World Cup, one European Supercup and two Spanish Supercups.