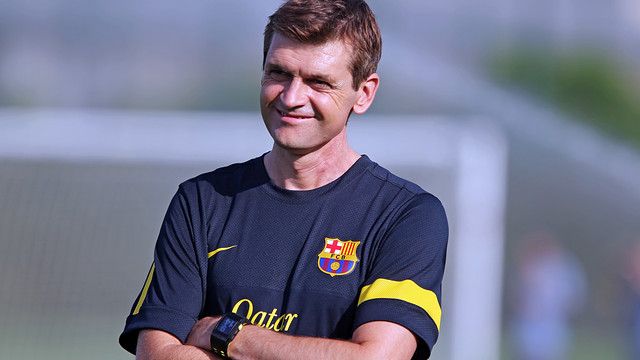 On an emotional afternoon at the Camp Nou, a tribute video for Tito Vilanova was shown that involved all the members of the first team

This Saturday afternoon, the Camp Nou paid tribute to the late Tito Vilanova during the build-up to the league game at home to Getafe. Members and fans of FC Barcelona were able to say their final farewell to the former manager. Shortly before the players emerged from the tunnel, a video was shown in his memory that involved not only such players as Puyol, Piqué and Cesc, but also the coaches and other employees of the club, including Dr Medina, reciting the words of the poem ‘La Vall del Riu Vermell’ set to music. They were also joined by members of the youth team in which Tito’s son, Adrià, plays.

As the Barça and Getafe players stepped onto the pitch, a huge banner appeared in one of the terraces, and the FCB team played in a special commemorative shirt with the words ‘Tito, per sempre etern’ (Tito, forever eternal) on the chest. Finally, the game was preceded by a respectfully observed minute’s silence.