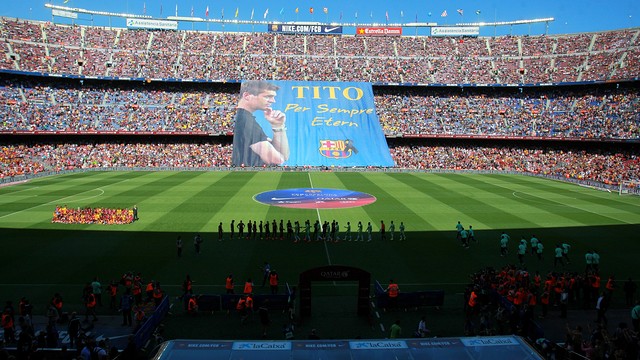 Before the match, the fans unfurled a massive banner that read ‘Tito, always eternal’

The Camp Nou paid tribute this Saturday afternoon to Tito Vilanova before the match against Getafe. The Club members and fans bid their final farewell to the former manager as a tribute video for Vilanova played at the stadium. In the video, Puyol, Piqué, Cesc and doctor Medina, among others, recite the lyrics of the song ‘La Vall del Rui Vermell.’ The Alevín C and Juvenil B teams, both of which Adrià featured for – Tito’s son – participated in the video.

When the players came out onto the pitch the fans unfurled a massive banner that read ‘Tito, per sempre etern’ (Tito, always eternal). The game got underway after the stadium observed a moment of silence.