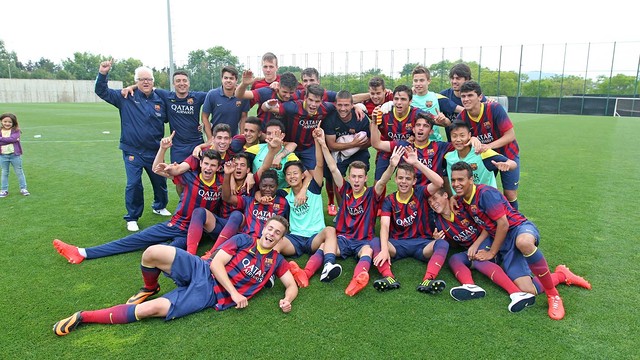 FC Barcelona’s football teams have won fourteen league titles this season, including big wins for the U18 and Ladies teams

Next week the U13 team could also win the title, provided their main rivals, Gavà, don’t win their game

It’s been another great year for youth football at FC Barcelona, proof of how much the first team’s success owes to the younger players knocking on the door. The first team may not have won any major titles, but the U18 team, the ladies team and twelve others all won their domestic leagues, and there is still one other league title that could yet be added to that list.

All four of the ‘alevin’ or U12 teams (A, B, C and D) won their leagues. Aleví A got a perfect 30 wins in 30 games and ended 12 points above second placed Cornellà. The B team won by the same margin over Espanyol, and the C and D teams, who play in the first division, are already champions with one game yet to play, leading by 9 and 5 points over Cornellà and Vila Olímpica, respectively.

Of the four ‘benjamin’, or U10 teams, three won the title. Benjamí A took the maximum 90 points to lead Sant Cugat Esport by 21 points. The B team also finished top, topping Espanyol by 4 points, while the C team beat second placed Sitges at the Ciutat Esportiva to ensure a 4 points margin with one game to go.

Benjamí D, however, probably won’t share the same glory. They will only win the title if they beat Sant Andreu on the last day and leaders Horta lose to bottom placed Fundació Hermes.

There are also the smallest players from the Prebenjamí (U8) and the girls from Infantil-Aleví, the latter winning their championship with a staggering 298 goals in 22 games.

The 11-a-side results were just as good. Juvenil B (U17) had to come from behind to eventually pip Lleida to the title by one point. The two U16 teams also won their leagues. Cadet A won the División de Honor by 14 points over Espanyol, while 11 points separate the Cadet B team from Cornellà with one game to go in the ‘Liga Preferente’.

At U14 level, Barça have one title and could still get the other. Infantil A ended the División de Honor with 10 points more than runners up Cornellà. Next week, they could be joined by Infantil B who lead the table but have no games left to play, and they could still be topped by Escola Gavà, who will do so if they beat Tortosa on the final day.

Moreover, there were also titles for the two professional teams, the U18s of Juvenil A and the Ladies A team. The side coached by Jordi Vinyals won the División de Honor by a massive 10 points over immediate pursuers Espanyol, and they also famously won the UEFA Youth League last April 14 by beating Benfica 3-0 in the final. It was also a grand year for the ladies playing under Xavi Llorens, who took the national title for the third season in a row, this time edging Athletic Bilbao into second.