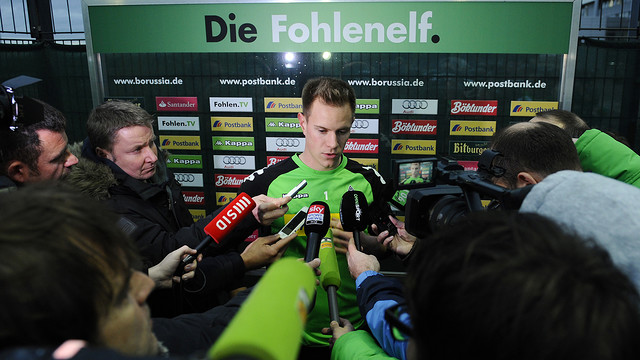 The press conference will start at 2:30 PM CET in the Auditori 1899

The signing ceremony and press conference will be streamed live on fcbarcelona.com

Marc-André ter Stegen will be presented this Thursday as a new FC Barcelona player this Thursday. The 22-year-old keeper is the first signing of ahead of the 2014/15 season, after the arrival of Luis Enrique.

The former Borussia Mönchengladbach player is expected to sign his contract at 1:00 PM CET at the Camp Nou. At 1:45 PM CET, the player will pose for the traditional photo shoot on the pitch of the Camp Nou.

At 14:30 the player will hold a press conference at the Auditori 1899, it will be broadcast live by Barça TV and streamed on fcbarcelona.com.

Marc-André ter Stegen, born in Mönchengladbach (Germany) on April 30 of 1992, is 189 cm tall and will be the second German keeper to don the Blaugrana strip, after Robert Enke. European U17 champion with Germany (2009), where he was named best keeper of the competition, and now international, Ter Stegen arrives to Barça after three seasons with Borussia Mönchengladbach.