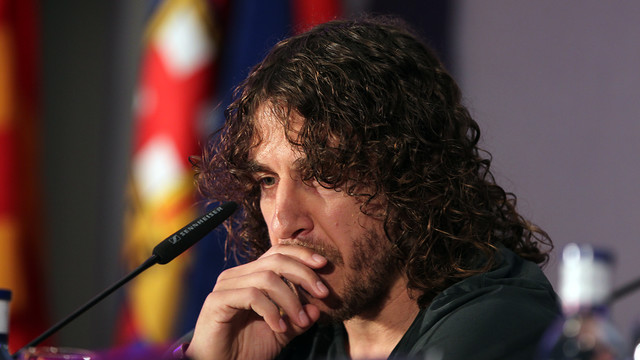 The captain bowed out at an emotional event at the Camp Nou this lunchtime, surrounded by Club heroes, past and present.

“‘It’s the end of an era, but there will be more and I hope to enjoy them as much as this one. Thank you all very much and visca el Barça!”.

“Together we can win the league”

Carles Puyol also spoke about the team’s chances of taking the title on Saturday: “if we all pull together, I am sure we are capable of winning it. I would love to win the league, especially for Tata, who has been an example to us all, and for Tito”.

[[DES_1]]FC Barcelona bid farewell to Carles Puyol, 36, after a fifteen year career in the first team that has brought him 21 titles. At a packed Auditori 1899,  Puyol’s teammates, ex-teammates, presidents and coaches  paid homage to a great captain.

Puyol spoke in the presence of his mother, brother, partner and friends Javi Pérez and Ivan de la Peña, as well as his agent Ramon Sostres and revealed that his knee injury had forced him to retire: “we tried everything and I’d like to thank the doctors and physios for everything. We’ve not figured out a way to fix it, but I’ve not given up. I’ll keep trying to sort it out, but now without the pressure of having to play”. [[CITA_1]]

Recalling his time as a boy, playing football in the street with his brother and his friend Javi Perez, Puyol commented: “I would never have thought then that I would have this great career. I’ve lived the dream of so many young kids, doing what I most enjoy in life, playing football and training. I’ve won lots of titles but the most important thing is the human warmth and feeling I take from this Club. I came here as a boy and I’m leaving with a family who I’m really proud of”.

Puyol thanked all the presidents, directors and Club employees, as well as all of his coaches and teammates: “they taught me so much. I’ve played with the best”.  The Spanish international also had words of thanks for his international teammates and especially for the fans: “I want to say thanks to the fans for the unconditional support they’ve shown me. They have always got behind me and I’ve been so lucky with that”.

Finally, Puyol remembered the people who were unable to see his signing off –his late father, Antonio Oliveres, Miki Roque, Luis Aragonés and Tito Vilanova. “it’s the end of an era, but there will be more and I hope to enjoy them as much as this one. Thank you all very much and  visca el Barça!”.

I’ve lived the dream of so many young kids, doing what I most enjoy in life, playing football and training