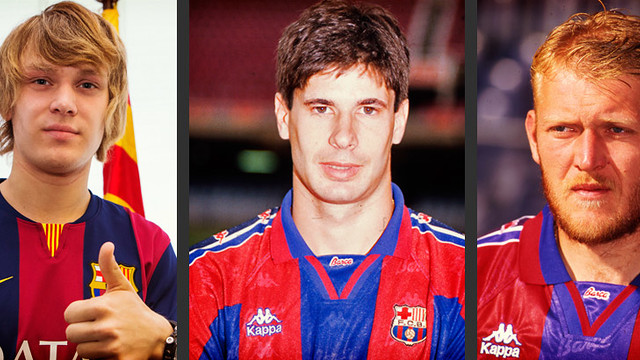 Vucevic and Prosinecki, who both had short spells at the Club, are the only other Croatians to play for Barça before Alen Halilovic.

Alen Halilovic signed a five year deal at the Club on Monday,  but he isn’tteh firts player from Croatia to join the Club -Goran Vucevic and Robert Prosinecki were both Barça players in the 1990s and below we take a look at their careers at the Camp Nou.

Goran Vucevic joined Barça in 1992 as one of the brightest young stars of Balkan football. Aged just 21, his natural skills and a superb spell in the Hadjuk Split midfield looked likely to presage a career at the highest level, but the restriction on foreigners and the tough competition at the Club meant he was reduced to playing for Barça B. Although he was a regular pre-season figure, he only managed two appearances for the first team in his debut season and was loaned out to Hadjuk Split and Mèrida before leaving the Club in 1997 to sign for Cologne and then returning to Dadjuk, where he later became a coach and sporting director.

The arrival of Robert Prosinecki in 1995 was something of a bombshell. Having won the European Cup with Estrella Roja in 1991, Prosinecki had a troubled time at Real Madrid and was loaned out to Oviedo before Barça sensationally snapped him up. His brilliant debut in the Joan Gamper Trophy promised much, but a series of injuries and loss of form meant he struggled to find a regular role in Johan Cruyff’s team.

Prosinecki left the Camp Nou in 1996, after 50 appearances 7 goals. After competing in three successive World Cups, he retired in 2004 and went on to coach Red Star and the Turkish side Kayserispor