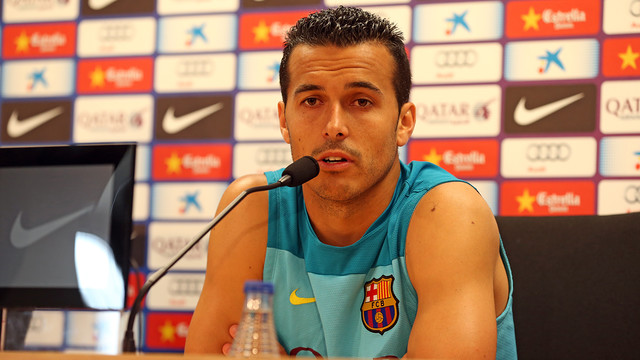 “We are convinced we can win the title, but it all depends on Sunday’s game in Elche” says the Canary Islander

“It was unthinkable the results would turn out as they have, and that’s why we had given up on the league. But these things happen. Every game is difficult and we can still achieve something big”

Pedro Rodriguez spoke to the press after today’s training session and described the sensations in the Barça camp now that their Liga challenge is so surprisingly back on track. “We have the squad and the players to do this” he said. Two wins in their last two games will win the trophy, and that was “a huge boost for morale” but they must remember that they first have to beat Elche. “If we don’t win on Sunday we’ll have no chance of winning anything” said the Canary islander. “With two games left we have a chance and it would be unforgiveable if weren’t to take it”.

“We have the chance to win the league, it’s a second opportunity. There are two games to play, and we’ll give it everything, there’s no doubt about that. We are going there with the hope of winning, of getting a good result … But we’ll need to stay focused so that we can be able to win the title at home, in front of our fans”.

Pedro, like most people, thought all hope had been lost after the 2-2 draw with Getafe. “It was unthinkable the results would turn out as they have, and that’s why we had given up on the league” admitted the 27 year old. “But these things happen. Every game is difficult and we can still achieve something big”.

Pedro ended with a few words about his own form as the season draws to a close. “I have been getting goals, but I’m not playing as much” he said. “Every season is different, difficult, and what I want to do is make the most of my chances.”