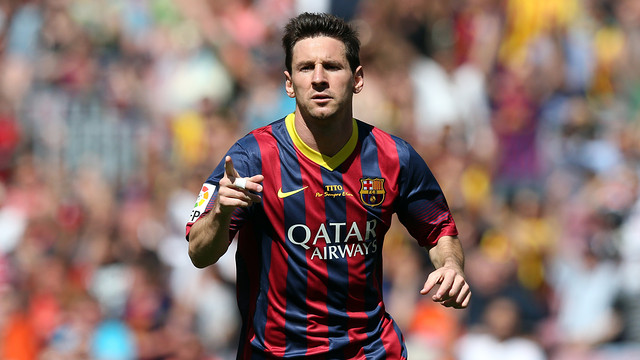 The Argentinian’s goal against Getafe leaves him just three behind Cristiano Ronaldo.

Alexis Sánchez is fourth in the list of goalscorers, with 18 goals.

Leo Messi is in the mix for the Pichichi title as the Spanish League’s leading goal scorer  – something he has already won on three occasions  – after his goal against Getafe on Saturday. The Argentinean is three goals behind the current leader Cristiano Ronaldo – who also scored at the weekend

Messi’s goal against Getafe meant he overtook Diego Costa who failed to score in Atletico’s defeat against Levante, and he now has 28, to Costa’s 27, with Cristiano Ronaldo on 31. Barça and Atletico have two more games to play, whilst Real Madrid have three.

Three Barça players in the Top-10

There are two more Barça players in the top ten goal scorers: Alexis Sánchez, who is fourth with 18 goals and Pedro Rodríguez, eighth on 15.