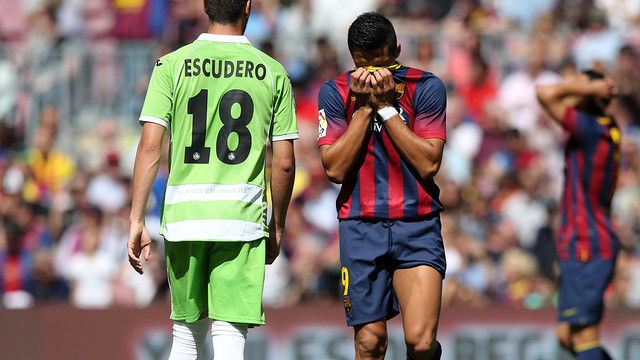 Messi and Alexis scored for Barça, but the third just didn’t want to come

The Camp Nou was witness to a game that produced a bitter twist right at the end. Lafita scored for Getafe in injury time and the draw leaves FC Barcelona with practically no hope whatsoever of winning their fifth league title in six years. Both Messi and Alexis had put Barça ahead, but the visitors found a reply both times, scoring with their only two serious attempts on goal.

The afternoon began with an emotional farewell tribute to Tito Vilanova, and then the game got off to a rather slow start. Adriano issued the first Barça warning, but other than this, most of the decisive play was coming down the right, where Alves and Alexis were combining well to get the ball onto the edge of Getafe area, but the visitors were keeping things extraordinarily tight at the back and Barça’s final passes were struggling to find their targets.

The deadlock was finally broken by a lethal piece of football involving Messi and Alves. The Argentinian started the move in the middle of the park, which was continued down the right by the Brazilian, who crossed into the area where Messi was waiting near the penalty spot to deliver the killer blow. A terrific goal, and 1-0 to FCB.

It was an untidy first half, with the Getafe players causing all kinds of interruptions, and the stop-start nature prevented Barça from getting into their usual rhythm. And then came disaster. Getafe were awarded a free kick deep inside the Barcelona half that led to Lafita scoring, and what followed was an almighty confusion. For a while it was unclear whether the referee had awarded the goal or not, something he eventually did, overruling his linesman’s belief that Lafita had handled the ball.

The half was almost over, but there was still time for an almost exact replica of Barça’s goal, this time with Alexis providing the cross. But this time nobody in the area was able to finish the job.

A very different game awaited after the break. Barça were quicker, more intense and more incisive. Messi and Alexis, the latter with a header onto the bar, came close before Martino’s 65th minute decision to replace Mascherano with Cesc, and pull Busquets back into defence. And with his first touch of the ball, Cesc initiated a move that ended with an Alexis-Pedro one-two and the Chilean putting the Catalans back in front.

Getafe, desperate for points in their relegation battle, had no option to go all out in search of a second equaliser. This gave Barça more space in which to operate, and produced a series of chances for Messi, Pedro and Alves, but luck just wasn’t on their side. And the home side would end up paying the price.

Deep into injury time, Getafe grabbed a late leveller from a Lafita header. There was no time for a Barça reaction, and it all ended 2-2, a result that as good as puts an end to FC Barcelona’s title bid. They are still mathematically in the hunt, but are now relying on a series of highly unlikely failures from both Atlético and Real Madrid.