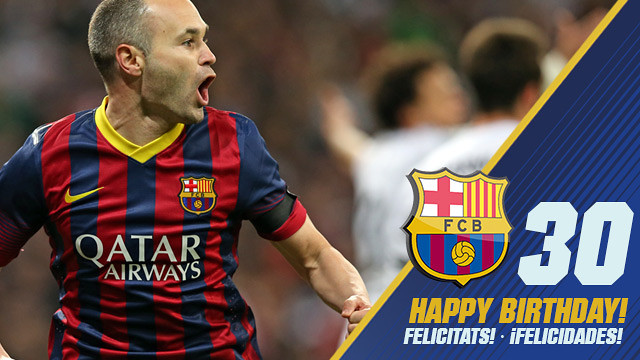 Andrés Iniesta is 30 this Sunday, and he does so with over 500 first team appearances for Barça already under his belt, a figure he reached against Athletic Bilbao last April 9. And shortly after that, he got his 50th goal, and it came in the clásico against Real Madrid at the Santiago Bernabéu.

Born in Fuentealbilla, he joined the FCB youth system in 1996 when he was just 12. Six years later, in October 2002, he made his first team debut in the Champions League against Bruges. He has gone on to become one of the key members of the Barça squad, winning 21 titles (6 Ligas, 3 Champions Leagues, 2 Spanish Cups, 2 European Supercups, 6 Spanish Supercups and 2 Clubs World Cups).

This week was also the fifth anniversary of perhaps his most famous goal for Barça, the one against Chelsea at Stamford Bridge that qualified the club for the Champions League Final, where they’d beat Manchester United in Rome to win the title in 2009.