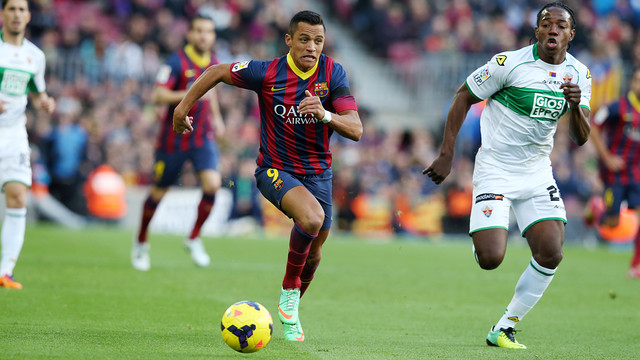 On Sunday, FC Barcelona visit the Martínez Valero, where Elche have not lost for almost five months

Their last nine games have ended in five wins and four draws, with seven goals for and just two against

Alberto Botía, formerly of Barça B, says that “Barça are a huge opponent and even more so now they’re playing for the league”.

If Barça win their last two league matches, they’ll be guaranteed the Liga title. But although a lot of people are already talking about the final day showdown with Atlético Madrid, the Catalans first need to make sure of the three points at Elche on Sunday at 7.00 PM CET. And that is not going to be as easy as some might think. The side from Alicante haven’t lost at home in 2014. Since going down to Malaga on December 20, they have collected points from their last nine home fixtures.

Those games at the Martínez Valero have ended in four wins and five draws. And although they only produced seven goals for Fran Escribá’s side, they are rock solid at the back, with only Levante and Sevilla having scored against them since Christmas.

In total, Elche have six home wins this season, and have drawn seven and lost five. They’re in fourteenth place, and just three points clear of relegation, so they still need points to ensure top flight football next term.

Alberto Botía, who was at Barça B from 2006 to 2009, is a first-team regular at Elche, having started 33 games this season, but on Sunday he’ll be watching from the stands due to a suspension. On Thursday he found the time to speak to ‘ADN’ on Barça TV, saying that Barcelona “is a strong opponent and even more so now that they’re fighting for the league.”

Sunday’s game brings together one of the highest scoring teams in the league and the one with the second best defensive record. Asked about this, Botía said “we need more luck in front of goal – statistics are definitely there to be broken.” And on the game, he added that “we both have something to play for, both them at the top and us at the bottom. That says a lot about the competition”.