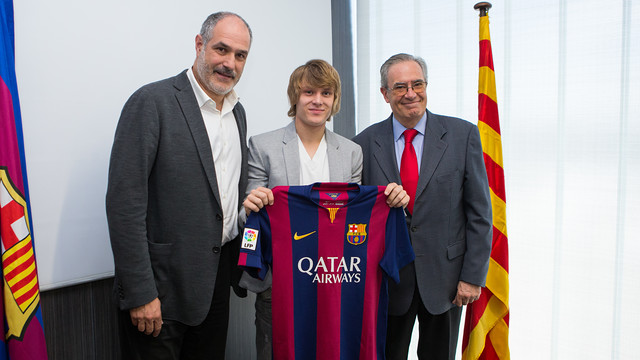 FC Barcelona, Dynamo Zagreb and Alen Halilovic agreed on the deal on March 27

Alen Halilovic signed a five year deal at the Club this morning. The Croatian, who will be 18 in June, will begin his time at the Club with Barça B.

FC Barcelona reached agreement in March with Dynamo Zagreb and Alen Halilovic for a 2,2 million Euro transfer, which could rise with first team appearances.

In April, Halilovic won the league with Dynamo after playing in 26 games  – starting 14 –  and scoring five goals.[[CITA_1]] Speaking exclusively to Barça TV and fcbarcelona.cat, Halilovic admitted: “this is a great day and I am very happy. I’ve always been a Barça fan and I know a lot about the Club. I’ve been watching Barça B this season – they are a young team who play great football”.

The Croatian youngster also spoke his first words in Catalan, explaining: “I can speak a little Catalan. I’m very happy to have been given the chance to play at the biggest Club in the world. Hello to all the Barça fans and Visca el Barça!”.

I’m very happy to have been given the chance to play at the biggest Club in the world.