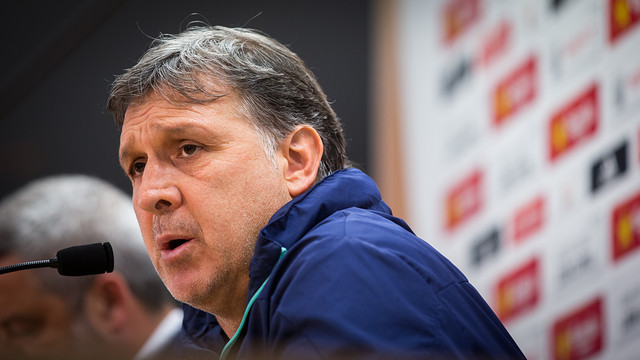 “There is a chance that Puyol, Piqué or Bartra could play, but we’ll have to wait until Wednesday” he revealed

He added that “the last two clásicos have been nice, exciting, open and honest games”

Gerardo ‘Tata’ Martino is thrilled on the eve of his first Spanish Cup Final. He knows that whatever happens in Wednesday’s game at Mestalla will do nothing to change the disappointments in the other two competitions, but “this is a final, and is a game in a different context.”

“Finals are there to be won” he continued. And even though his players have played so many games like these of late that that one might suspect that some of the magic has been lost “there is nothing routine about playing finals. They are our objective. The players are used to playing finals, but it doesn’t make them any less important. The cup is not something to be ignored, we want to win this as much as we would want to win any final.”

Martino also commented that “what we have done over the last few days has been more about talking than training, about making verbal corrections”.[[CITA_1]]

It is still unclear whether central defenders Bartra, Puyol and Piqué will be ready in time to travel to Valencia, but Martino was able to say that in today’s training session “they joined in with the play and looked to be responding well … We do have the hope of one or more of them being available, but we’ll have to wait until Wednesday to know for sure … But no player will be playing unless they are in the right condition to do so”.[[CITA_2]]

Martino expects the game with Real Madrid to be as thrilling as the two league matches earlier this season. “We’ve had some nice, open games, with both teams playing well. They’ve been exiting and honest matches” he commented. “But this is a different kind of game because there is a title directly at stake. We have to think about the good moments from the other games with Madrid. To have a chance of winning this game, we are going to have produce our very best football.”