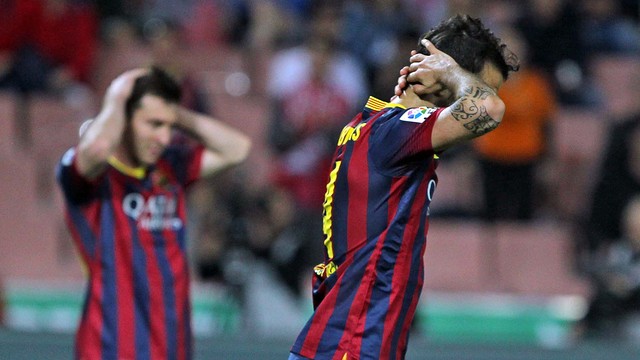 FC Barcelona have lost by the only goal of the match in Granada. It was one of those games in which the ball just simply didn’t want to go in. The visitors shot no fewer than 29 times, but not one of those was enough to neutralise Brahimi’s opener. This was a very different game to the ones in San Sebastian and Valladolid. At the Nuevo Los Cármenes, Barça created threat after threat, but couldn’t secure the three points, or even just one, and now find that their destiny in La Liga is once again out of their hands.

Barça started with a very different eleven to the one that lost at the Calderón on Wednesday night, with Montoya and Adriano at full back and Busquets covering for the injured Piqué, Puyol and Bartra at centre back. Perhaps it was the unfamiliar defensive line-up that caught the visitors off their guard and allowed Brahimi to break into space to latch onto a through ball and slip the ball past Pinto. In their first attack of the game, Granada found themselves 1-0 up.

Barça reacted immediately. Montoya was exceptional down the right and came close with a couple of chances. Messi and Neymar, the latter with his head, also missed by the tiniest of margins. Despite their uncertainty at the back, Barça didn’t deserve to be trailing at half-time. They had played practically all the football, but had nothing to show for all that hard work.

Barça were again the better team after the break. Cesc, Neymar, Iniesta and Messi all had golden chances to level affairs, but their shots either went wide by mere centimetres, or were intercepted by an inspired Karnezis in the Granada goal.

Incredibly, Barça totalled a massive 29 shots on goal against a Granada side that did little more than sit back and defend their early lead. But absolutely nothing was going Barça’s way. The ninety minutes ended in a painful defeat, and with Real and Atlético Madrid yet to play this weekend, the Catalans’ Liga challenge now depends on those two teams dropping points in the few games left of the competition