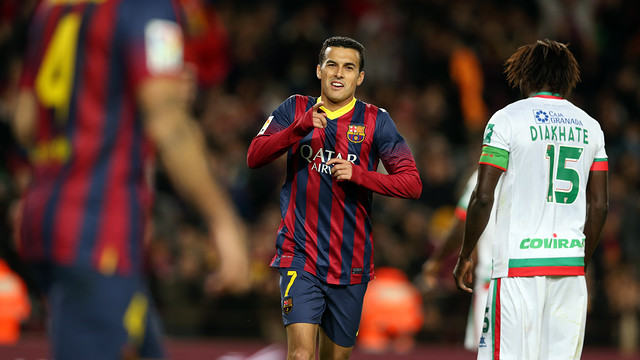 Just six games stand between FC Barcelona and their fifth league title in six seasons. The first of those is this evening in Granada (8.00 PM CET) and comes in the shadow of the disappointment of Champions League defeat to Atlético Madrid, and with the potential distraction of the cup final against Real Madrid in just four days’ time. But this game at Los Cármenes is also of vital consequence, for anything but three points will put Barça’s league title bid in serious jeopardy.

So these are hardly ideal circumstances, and the team suffered another blow on Friday when Marc Bartra pulled his right hamstring in training. Although the injury is not likely to be too serious, it’s enough to keep him out of the travelling party, which means the Catalans will be facing Granada with a worrying lack of defensive resources.

With two other regular centre backs, Puyol and Piqué, also out through injury, Gerardo Martino only has one natural player for that position. Mascherano will probably be teaming up with one of Adriano, Song or Busquets, all of whom have some experience of covering in that position in the past.

Granada, meanwhile, are a team in dire need of points. They are three clear of the drop zone at the moment, but manager Lucas Alcaraz is preparing himself for a nervy run-in to the end of the season. For this match, he regains both Recio and Ighalo, but loses the suspended left back Brayan Angulo and injured striker Riki.