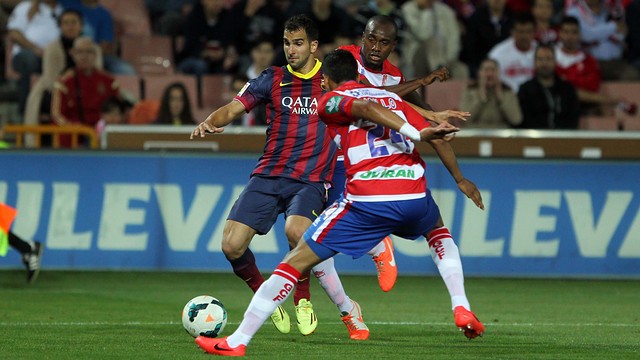 The Argentinian center back, Javier Mascherano, talked to the press after the game against Granada and he rued his team’s missed chances: “The ball didn’t want to go in, but we can’t make excuses. I think we created chances to score, but football can be like this.” Mascherano went on to acknowledge that Barça’s title hopes were dented by not winning the three points this evening: “The league is no longer in our hands. I don’t think the defeat in the Champions League affected us, we created a lot of chances.”

Barça will face Real Madrid in the final of the Copa del Rey on Wednesday, and Mascherano is hoping the team will bounce back for the title match: “I think we deserve to have a great game on Wednesday. We have to pick ourselves up and look forward, because on Wednesday we have a final and we cannot fail.”

“It’s a step backward. We made a mistake in the play that led to their goal and that really hurt us.”

“Sometimes it’s hard to find an explanation, we did everything we could to score.”

“It hurts to take this backward step at this point in the league, when there’s so little left for the year to be over.”

“Mentally we’re pretty screwed up, we could have won but we couldn’t capitalise on our chances.”

“We gave it our all but in the end it wasn’t possible.”

“We will fight for the league until the end, we still have games left and hopefully our rivals lose points.”

“I ask the fans to support us on Wednesday, we want to dedicate a victory to them.”

“It’s been a while since I’ve played, I wanted to show that I can play in this team.”