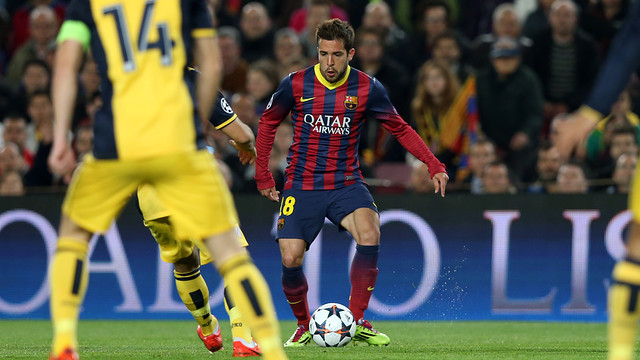 The Catalan defender reckoned that Barça improved after the break

Jordi Alba spoke to the Barça TV programme ‘El Marcador’ after the game on Tuesday and made it clear that he’s relishing the return trip to the Calderon: “we’ll have to go with all guns blazing in Madrid if we want to reach the semis – we’ll need to put a really good performance. Atletico Madrid are a tough team to play and we’ve drawn every game with them so far”.

Alba was philosophical about Tuesday’s draw: “on the negative side, we wanted to win and we didn’t, but on the positive side we did play well . We had possession in the forst half, but weren’t able to create many chances, which we certainly did after the break”.[[CITA_1]] The Catalan also praised Atletico : “it’s true that they make it hard to play against them, they have some top quality players and they never stop running”.

Neymar what could prove a vital equaliser and his teammate backed him to succeed at the Club: “he’s putting in a great season, He looks great to me and he’s a player who’ll give the Barça fans lots to be happy about. The more the other team kick him, the more he likes to take on responsibility”.

Neymar’s putting in a great season, He looks great to me