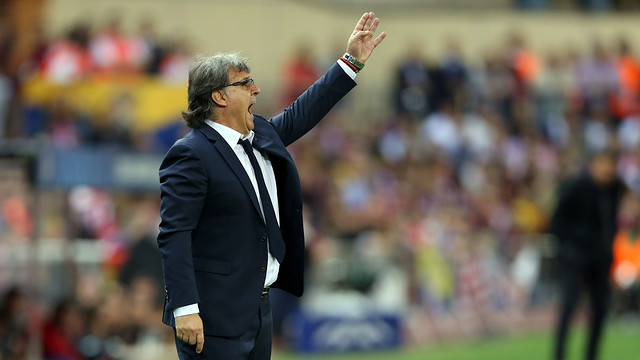 “It’s not that we didn’t match their intensity, it’s that we were unable to string 4-5 passes together like we wanted to,” said the manager

“The team isn’t doing well now (morale). We will move forward in the Liga and the Cup,” concluded Martino

Gerardo Martino commented in his post-match press conference that his men “were brave. We were brave in that we tried to play like Barça have for the past decade. Playing like this is brave.” When asked about the game against Atlético, Martino said that “the flow of the game was what they (Atlético) were looking for” and “it’s not that we didn’t match their intensity, it’s that we were unable to string 4-5 passes together like we wanted to.”

Domination from the start by Atlético

“We had our chances after Atlético had taken the lead, they had chances too, but if we could have scored it would have been a different game,” said Martino, who added that “all of the games against Atlético have been similar. They score the first goal because they were more intense than us.”

When asked about Leo Messi’s performance, the manager said, “we wanted Messi to engage in one-on-ones with his defender on the right wing. He didn’t have a lot of participation, but he did have two goal-scoring chances. We didn’t base our whole game plan on Messi’s position, we also had Cesc, Neymar and Iniesta.”

Finally, when asked about the morale of his men, Martino said that “the team isn’t doing well now. We will move forward in the Liga and the Cup. The most important thing is to continue competing, we have a decisive game in Granada and next Wednesday we have the Cup final.”