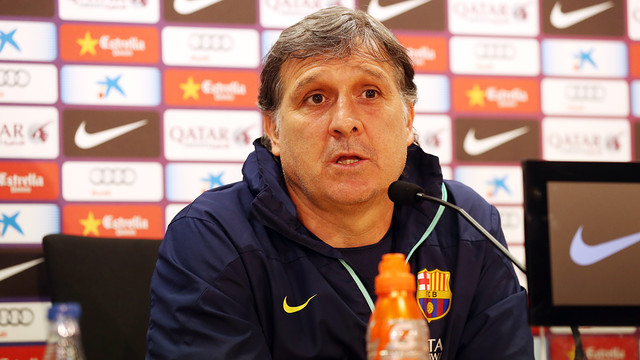 After the Champions League setback, “nobody is in the best of moods, but there is no time for lamentations”

“We have to win every game we have left if we want to win the league” says the FC Barcelona boss. “But at least our destiny is in our own hands”

Gerardo Martino spoke to the media this Friday, the day before the league campaign resumes with a trip to Granada. He knows it will be a difficult match because “they need the points as much as we do … But we know what’s at stake. We have to win every game we have left if we want to win the league. At least our destiny is in our own hands.” [[CITA_1]]

“If these players have shown one thing, it’s that they know where they are playing and they know what they are playing for tomorrow” continued the Argentinian. “But we have to remember that the other team is playing too”. The game comes just three days after the bitter disappointment of going out of the Champions League, and ‘Tata’ added that “it is impossible for a team to be fully over an elimination like that in so little time. Nobody is in the best of moods, but there is no time for lamentations. We have to get straight back to thinking about the league”.

“It hasn’t been an easy year” he went on to say. “There have been a lot of news stories. It hasn’t been a great year for the institution. So many ups and downs. But we never drifted off course or changed the way we play, we just played better or worse.”

Martino then argued that he had been misquoted in the press, where it was reported that the manager had deliberately limited Messi’s role against Atlético. “What I said is that I wanted to limit his role as a playmaker. To leave him up front and for the others to try to create chances for him. If he had scored, the press would be telling a very different story … It isn’t easy for Messi. Expectations of him are so high that if he isn’t quite as brilliant as he has been in other games, then he comes in for exaggerated criticism.”

As for the Champions League, Martino said “for me personally getting knocked out was a failure and it will continue to be even if we win the league and cup double.” But does he think that the absence of European distractions could work in favour of Barça’s quest for the league title? “Only having to play one game a week might be positive” he agreed. “But I’d very happily swap places with either of Atlético or Real Madrid right now!”

It is impossible for a team to be fully over an elimination like that in so little time
It isn’t easy for Messi. Expectations of him are so high
We use cookies to ensure that we give you the best experience on our website. If you continue to use this site we will assume that you are happy with it.Ok